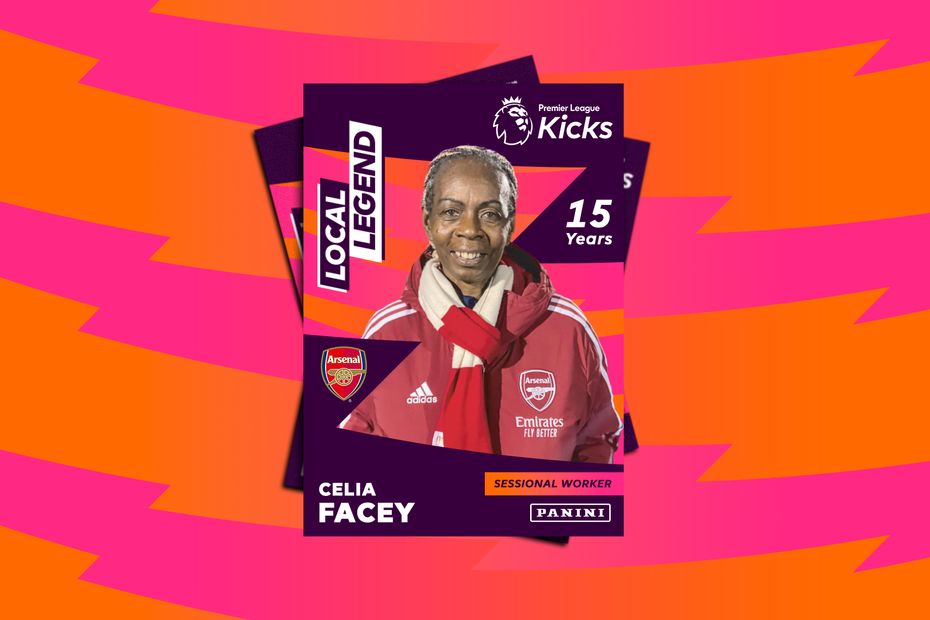 A key component of the Premier League Kicks programme is the long-term commitment of club coaches to mentoring and supporting young people at their sessions.

And there is no better example of this dedication and consistency than with Arsenal in the Community coach Celia Facey.

Celia is a cornerstone of Arsenal's PL Kicks delivery, having been a coach in Islington since it began in the 2006/07 season.

And as part of the programme's 15-year celebrations, the 67-year-old has been named the club's "Premier League Kicks Local Legend".

"I'm very passionate about the kids I work with," she says. "A lot of the young people grow up on the estate and I know their parents as well, so it's like a little family.

"A lot of them become coaches after being involved [as participants] so I just love being here! It's a real honour to have this award and I'd like to thank all the people who put me forward for it. It makes a big difference in my life as well."

One of the young people who has benefited from Celia's guidance and encouragement is Jely Kikamba, who has progressed from participant to PL Kicks coach and is now mentoring and supporting others.

"She is the godmother of the Elthorne Estate," he says. "She's been here from the start and I don't think she's going any time soon!

"She's seen me grow, so having someone like her in the community is really good because everyone sees her, everyone knows her. She's a big part of PL Kicks."

PL Kicks engages youngsters in some of the most high-need areas across England and Wales, improving participants' wellbeing through free weekly football sessions and educational workshops.

The impact of this inspiring work carried out by Celia and Arsenal in north London is recognised by Islington Council leader Kaya Comer-Schwartz.

"In a borough where we have 40 per cent child poverty, it brings a lot of hope," she says. "It brings activity to young people, somewhere safe where they can be. It's free and it means they can have a lot of fun. It's really important for our children.

"Celia is an absolute legend. She's here in all weathers, all year round. She's really one of these quiet heroes that doesn't ask anyone for anything but is there for our community throughout everything."