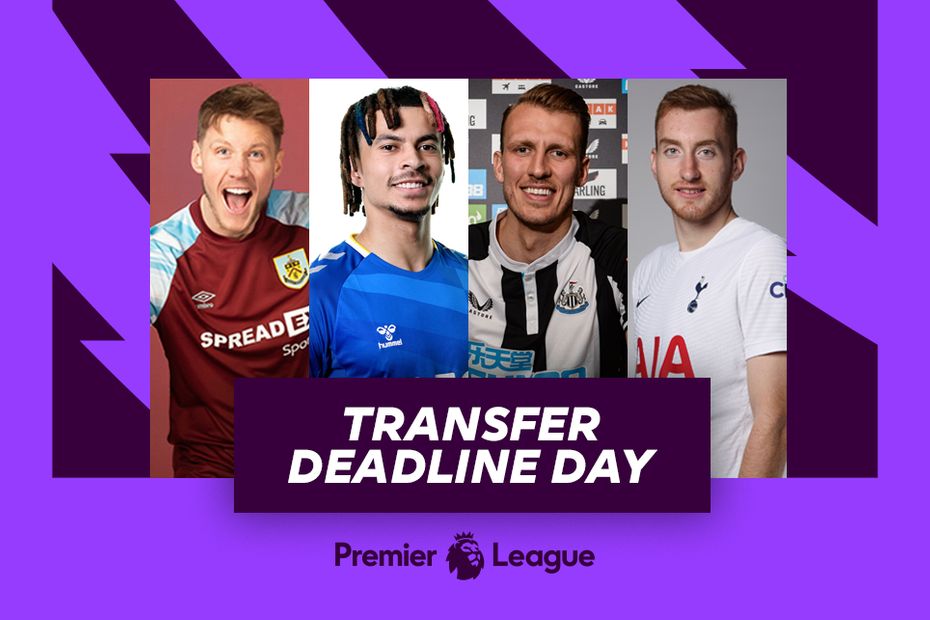 00:40 We're signing off now. It's been a busy Deadline Day and you can relive it all below. You can also see the deals that have happened throughout the January window, at every club, here.

00:35 The Scout says Dele Alli (£6.2m) is immediately worth considering in FPL: "If he is handed the No 10 role by Frank Lampard, Dele's prospects in Fantasy can be revived by Everton’s schedule. Each of their next three matches score only two in the Fixture Difficulty Ratings."

00:30 What a day it's been at Everton! The Toffees have now completed the permanent signing of Dele Alli from Tottenham Hotspur.

“I'm eager to get started and can't wait for my first game in an Everton shirt," he says. "I’m looking forward to helping the team and the opportunity to work with the new manager Frank Lampard." Read more

00:26 Liverpool defender Neco Williams has joined Fulham on loan for the rest of the season. Full story

00:01 Another Newcastle midfielder heads out on loan at the end of a busy day at St James' Park, with Jeff Hendrick joining QPR. Read more

23:45 Newcastle midfielder Matty Longstaff has joined Mansfield Town on loan for the rest of the season. Read more

23:20 The deadline has passed but we may not be done yet! A number of deal sheets have been submitted, giving clubs an extra two hours until 01:00 GMT in which to submit the full paperwork to complete a transfer. Here's what a deal sheet looks like, below.

23:00 Crystal Palace have signed 19-year-old forward Luke Plange from Derby County. The teenager will spend the rest of the season on loan with Wayne Rooney's Rams. Read more

22:47 Todd Cantwell has left Norwich on loan, joining AFC Bournemouth, who have an option for a permanent deal at the end of the season. Read more

"I'm buzzing to be here," he says. "I never thought I'd be in this position so to be a Newcastle player and to be around St. James' Park, it's something I've dreamt of since I was a kid." Read more

🗣 "I don't think anyone that isn't a Newcastle fan really understands how much it means to the city. Hopefully I can bring a little bit of that passion to the club on and off the pitch."

22:33 Everton's 19-year-old midfielder Lewis Warrington, who has been with the Toffees since the age of six, will spend the rest of the season on loan with Tranmere Rovers. Read more

22:05 Jean-Philippe Mateta's loan period with Crystal Palace has been turned into a permanent deal, with the striker signing a contract until 2026. Read more

22:00 Only one hour to go until the deadline! But clubs can use a deal sheet to get a little extra time to complete a transfer.

21:50 Brentford have recruited 18-year-old striker Hans Mpongo from non-league side Needham Market until the end of the season, with the option for a further year, after a successful trial period. Read more

Will you be bringing in Donny van de Beek now that he is with Everton? 🤔

Their next three matches all score 2️⃣ in the Fixture Difficulty Ratings...#FPL pic.twitter.com/QkaXrf19j9

21:35 Brighton have signed 18-year-old winger Benicio Baker-Boaitey from Porto on a loan deal until the end of the season, with a view to a permanent move. He will initially join the club's Under-23 squad. Read more

21:30 Defender Sam Hughes has left Leicester permanently after five years with the Foxes, moving on to Burton Albion. Read more

21:00 Two hours to go until the deadline! Still time for some big moves. While we're waiting, how much do you remember about deals from previous January transfer windows? Try our quiz

20:05 Brentford's 22-year-old defender Luka Racic will spend the rest of the season with HB Koge in his native Denmark. Read more

“I played against him when I was at Ajax, and he was at Chelsea [as manager], so he knows me as a player," says the Dutch midfielder. "He thinks I have qualities that can help the team. I can learn a lot from him because he was a little bit in the same position – a midfield player who scored a lot of goals." Read more

18:30 Brighton have signed striker Deniz Undav from Royale Union Saint-Gilloise. The 25-year-old will remain on loan with the Belgian club for the rest of the season. Read more

18:15 Spurs continue to reshape their midfield, with Giovani Lo Celso heading out on loan to Villarreal. Read more

18:00 Left-back Matt Targett has left Aston Villa and joined Newcastle on loan for the rest of the season. He becomes their fourth January signing and will wear No 13.

"My family have friends here and they've always said it's a football-mad city, so to experience it and be part of it, I'm really looking forward to it," says Targett. Read more

17:55 The Scout on what Spurs signing Dejan Kulusevski can offer in FPL: "The versatile Swede is expected to challenge Lucas Moura (£6.5m) for a role on the right of Antonio Conte’s preferred 3-4-3 formation, while he also provides a further option as an attacking central midfielder in a 3-5-2 set-up."

17:50 Everton owner Farhad Moshiri has been discussing what Toffees fans can expect from Frank Lampard.

"You can quickly relate to him and there is a positivity and confidence that comes through," says Moshiri. “He will give the team an immediate boost. A dressing room will always rise to someone of his character and achievement." Read more

17:33 There's more movement in the Spurs midfield, with winger Bryan Gil heading to Valencia on loan for the rest of the season. Read more

16:45 A second new arrival in a matter of minutes for Spurs, who have signed Swedish attacking midfielder Dejan Kulusevski from Juventus on an 18-month loan with an option to buy. Read more

16:33 Spurs have bolstered their midfield options with the permanent signing of Uruguay international Rodrigo Bentancur from Juventus on a deal until 2026. Read more

16:00 There is movement at Liverpool as the Reds confirm that centre-back Nat Phillips will join AFC Bournemouth on loan for the rest of the season. Read more

15:42 A significant out is confirmed at Tottenham Hotspur, with midfielder Tanguy Ndombele returning to his former club Lyon on loan for the rest of the season. Read more

15:07 At Newcastle United, goalkeeper Freddie Woodman has signed for Championship promotion hopefuls AFC Bournemouth for the rest of the season. Read more

14:41 There's an out at Stamford Bridge, with Chelsea's attacking midfielder Tino Anjorin, who has just returned from a spell at Lokomotiv Moscow, moving to Huddersfield Town on loan for the rest of the season. Read more

14:07 Manchester City have announced the signing of striker Julian Alvarez from River Plate. The 22-year-old forward will remain at River on loan "at least until July 2022". Read more

13:32 Everton have confirmed the appointment of Frank Lampard as their new manager. Lampard returns to the Premier League, having previously taken charge of Chelsea between 2019-2021.

“It is a huge honour for me to represent and manage a club the size and tradition of Everton Football Club. I’m very hungry to get started," Lampard told the club's official website.

11:35 The Scout says Burnley signing Wout Weghorst could become an FPL target: "The forward scored 16+ goals in each of the previous three Bundesliga seasons and could prove a popular pick if Burnley’s busy schedule leads to more Double Gameweeks."

11:20 The Scout on how Brentford's signing of Christian Eriksen may affect FPL: "Eriksen’s delivery will be a major weapon for a Brentford side whose total of 97 shots from set-pieces ranks third in 2021/22 Fantasy."

11:05 Burnley have completed the signing of striker Wout Weghorst from Wolfsburg. Read more

10:45 West Ham have confirmed defender Frederik Alves has made a permanent move to Brondby. Read more

08:00 The first signing of the day has already been announced, with the return of Christian Eriksen to the Premier League. Brentford have announced the arrival of the Dane on a deal to the end of the season.

“We have taken an unbelievable opportunity to bring a world-class player to Brentford," Brentford head coach Thomas Frank, who coached Eriksen many years ago in their native Denmark, told the club's official website. "He hasn’t trained with a team for seven months but has done a lot of work on his own."