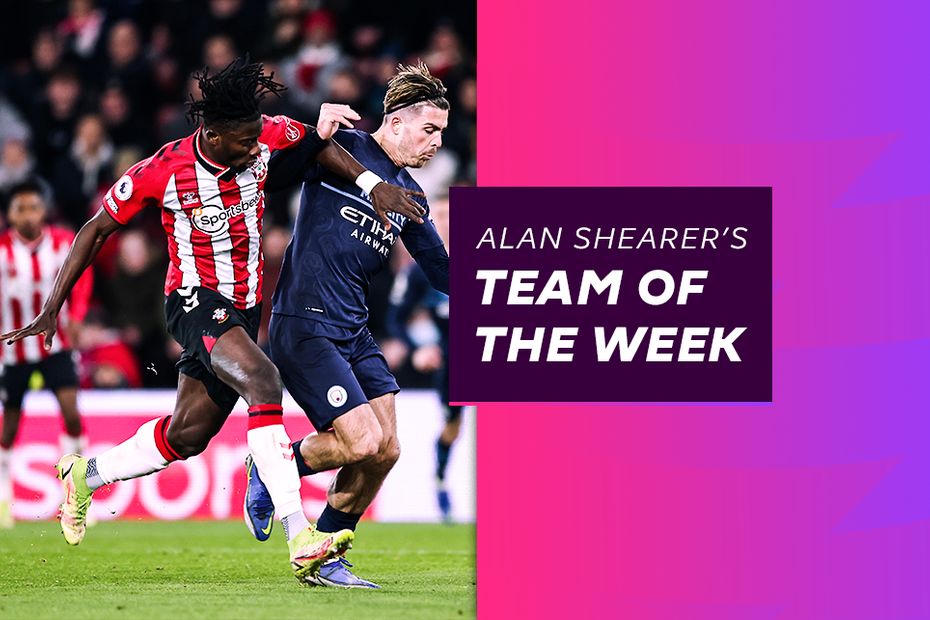 Manchester City's 12-match winning run in the Premier League came to an end with a 1-1 draw at Southampton on Saturday, and Alan Shearer has hailed the display of Mohammed Salisu against the leaders.

Shearer was hugely impressed by the way the Southampton centre-back nullified the threat of a Man City attack featuring the in-form Kevin De Bruyne.

Salisu is one of two Saints players selected by Shearer, the Premier League's record goalscorer and a Hall of Fame inductee, in his Team of the Week.

Martin Dubravka (NEW)
"Made one brilliant save and was commanding in coming for crosses during Newcastle United’s 1-0 win at Leeds United."

Kyle Walker-Peters (SOU)
"His first Premier League goal was a great one, and he had to defend very well in the second half against Man City."

Fabian Schar (NEW)
"Produced his best performance of the season at the back, heading the ball away from danger time and again."

Mohammed Salisu (SOU)
"Man of the match as Southampton stopped the leaders' long winning run. He just blocked everything."

We're running out of adjectives 😅 pic.twitter.com/6evxv3SbfI

Thiago Silva (CHE)
"Still a class act, helping his side to a clean sheet at one end while scoring at the other as Chelsea beat Tottenham Hotspur 2-0.

Andrew Robertson (LIV)
"An assist machine at the moment, supplying another two in Liverpool's 3-1 win at Crystal Palace."

Jonjo Shelvey (NEW)
"Scored the winner and was only denied another by a good save. He needs to keep that level now."

Joao Moutinho (WOL)
"Scored a great goal and then set up Ruben Neves’s winner in an outstanding performance in Wolverhampton Wanderers' 2-1 victory at Brentford."

Hakim Ziyech (CHE)
"Chelsea needed a moment of quality and his stunning finish couldn’t have been any better. He’s scored in back-to-back matches now."

Josh Sargent (NOR)
"An outstanding display as his first Premier League goals helped Norwich City to a huge 3-0 win over relegation rivals Watford."

Emiliano Buendia (AVL)
"Looked after the ball really well and got the decisive goal with a brilliant looping header as Aston Villa beat Everton 1-0."

Manager: Dean Smith (NOR)
"Smith has led Norwich to consecutive wins to lift them out of the bottom three. They have a great chance of staying up now."