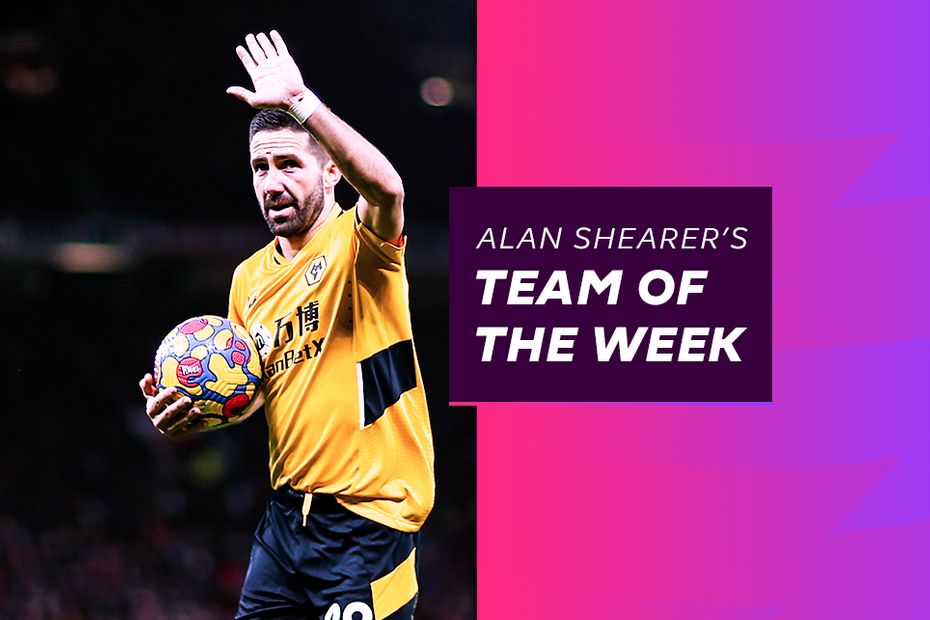 Moutinho | On three points, his winner and handling United External Link
Wright: Wolves made light work of Man Utd
What we learned in Matchweek 21

Joao Moutinho scored the winner at Manchester United but, for Alan Shearer, it was the 35-year-old's dominant midfield display in Wolverhampton Wanderers's 1-0 victory that provided the platform for their success.

Moutinho's precision finish with eight minutes remaining crowned an exemplary performance that has earned him a place in the Matchweek 21 Team of the Week of Shearer, the Premier League's record goalscorer and a Hall of Fame inductee.

Caoimhin Kelleher (LIV)
"Produced three outstanding saves and couldn’t do a thing about the two goals Liverpool conceded in their 2-2 draw at Chelsea."

Mads Roerslev (BRE)
"Made a real impact when he got forward into the final third, with a goal and an assist in Brentford's 2-1 win over Aston Villa."

Dan Burn (BHA)
"Scored with a header at one end and made several last-ditch tackles at the other in Brighton & Hove Albion's 3-2 victory at Everton."

Joao Moutinho (WOL)
"He had full control in the midfield and deserved to score the winner. He was the best Portuguese player on the pitch by a long way!"

Declan Rice (WHU)
"Clocking up his 150th Premier League appearance in West Ham United's 3-2 win at Crystal Palace, he seems to be getting better every month. He got another assist this time."

Mateo Kovacic (CHE)
"Brilliant in every department and scored a Goal of the Season contender. The best player in a high-quality match."

Bukayo Saka (ARS)
"An excellent finish in a 2-1 home defeat to Manchester City was the highlight of a very good all-round performance by the Arsenal winger."

Alexis Mac Allister (BHA)
"Scored two excellent and different goals, with a run off the ball into the box and a sublime strike from outside the area."

Mohamed Salah (LIV)
"As soon as he was in behind, a goal seemed inevitable. The run, the skill and the finish were all perfect."

Manuel Lanzini (WHU)
"The man of the match, scoring twice against Palace. He produced brilliant skill and a fine finish in off the crossbar for the first."

Manager: Bruno Lage (WOL)
"Masterminded a superb win at Old Trafford. Wolves were the better team by a mile and deserved their first Premier League victory there."