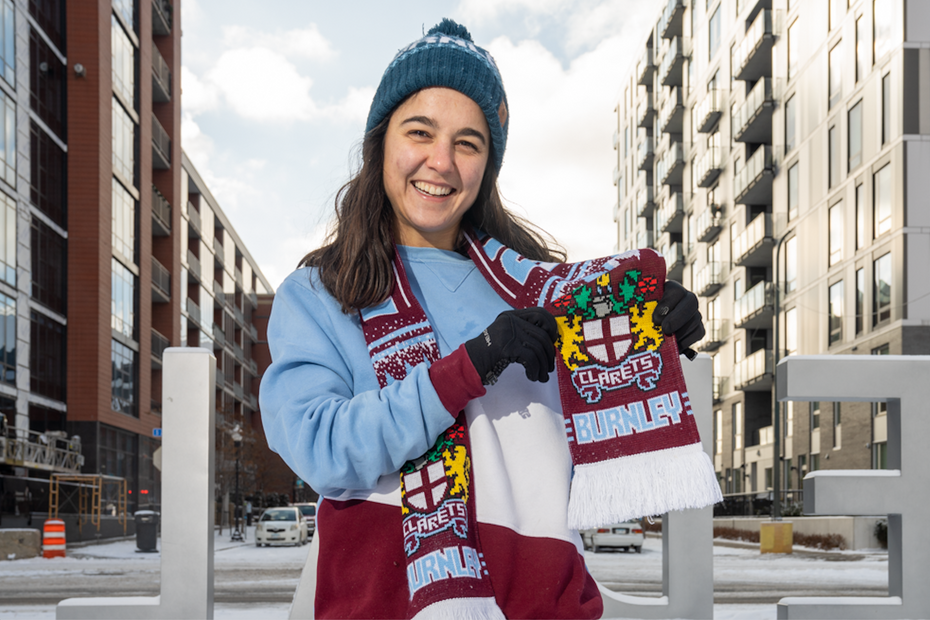 Meet Andrea, a Burnley fan from Minneapolis who, along with her husband and dog, have found plenty to cheer for in the Clarets.

“You know when the Burnley mascot, Bertie Bee, rugby-tackled that pitch invader a while back? I think that’s when my husband and I became fans of the club!

"He used to work for Minnesota United, the MLS team here in the Twin Cities. He’d go into work on Monday and everyone would be talking about the Premier League so he told me we had to pick a team to join in the conversation.

"We’d researched the clubs and agreed we didn’t want to choose one of the top clubs that everyone else already supports.

"We liked Burnley’s underdog story, so we just started watching them and fell in love with their grit and Sean Dyche and everything he does for the team. And of course, Bertie Bee’s rugby tackle, too. That was too funny.

"It’s not easy to get kitted out as Burnley fans in America, but we have jerseys and a couple sweatshirts now. When we wear them around town we’ll get funny looks from people being like, ‘What? I’ve never seen a Burnley fan before.’ You don’t think a lot of people in the middle of Minnesota know who this squad is, so it’s fun for us when people notice.

"Once, while watching a match at a bar downtown, a man came up to us and bought us beers. He turned out to be the owner of the bar and was actually from Burnley. He was just excited to see some other people in Burnley gear.

"Speaking of gear… at our wedding, the officiant had something by him all bundled up and we couldn’t tell what it was. After we said our vows, he took it out and it was a Burnley scarf. He then announced to everyone that this team had helped us become more of a couple. Let me tell you we did NOT plan that, but it was touching (and comical, mostly comical).

"That’s what I think supporting Burnley is about. Having fun. We love watching them play hard. It’s not all about winning, it’s about enjoying the ride and being an underdog. And as you know, it’s always a rough game against Burnley.”