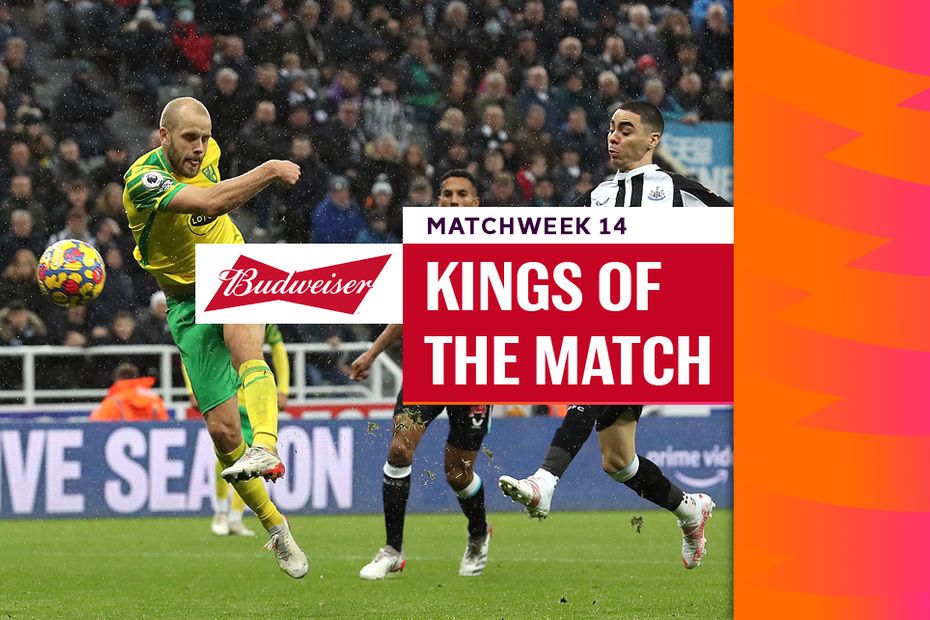 Pukki: It’s good to come from behind, but we should have won External Link
Best first-time volleys in Premier League history
'The top three are best we've seen in a long time'

After the final whistles in Matchweek 14 of 2021/22, thousands of supporters voted to crown their Budweiser Kings of the Match.

See who came out on top in the midweek matches, and click on the results below to find out how the voting went.

The Norwich City striker scored with a superb volley to give his side a well deserved point at Newcastle United.

A stoppage-time penalty by the Brazilian earned Leeds United all three points against Crystal Palace.

Maddison scored his second goal in as many matches to earn Leicester City a point at St Mary's.

The midfielder netted the opening goal before setting up Hakim Ziyech to help Chelsea remain top of the Premier League.

The Wolverhampton Wanderers goalkeeper made a terrific save to deny Dwight McNeil and keep a third successive clean sheet.

The Manchester City midfielder's wonder goal earned his side a fourth successive win as they triumphed at Villa Park.

Salah struck twice in Liverpool's Merseyside derby victory, earning a huge 84.5 per cent of the vote.

Scored one goal and made another as Tottenham Hotspur recorded back-to-back home wins for the first time since August.

Claimed over two-thirds of the vote after scoring twice, including the penalty winner to settle a five-goal thriller at Old Trafford.