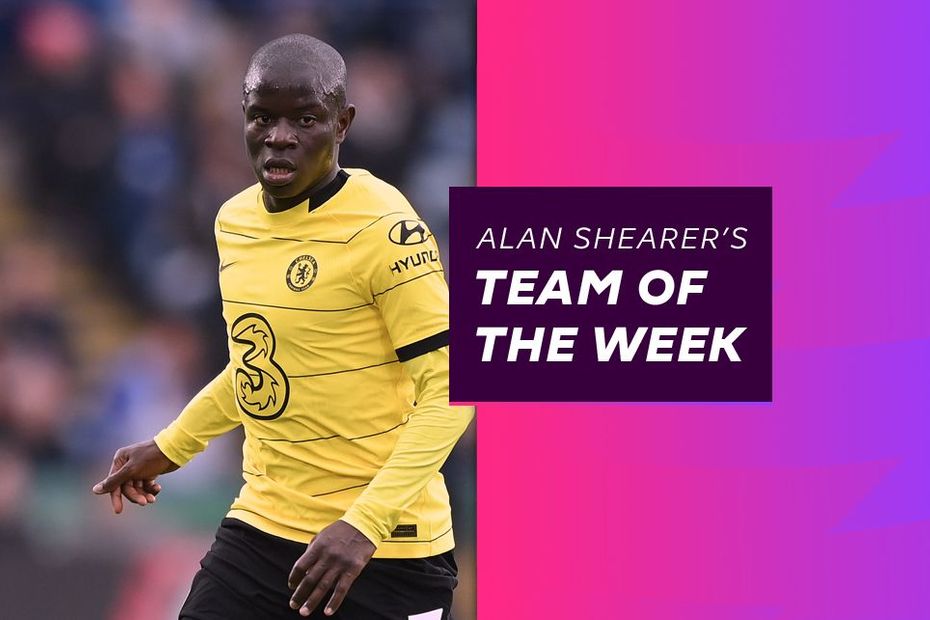 Kante: It was a good goal on a special day External Link
Carney: Squad depth makes Chelsea team to beat
What we learned in Matchweek 12

N'Golo Kante not only got on the scoresheet at Leicester City on Saturday but, for Alan Shearer, the Frenchman's influence in Chelsea's 3-0 victory was all over the pitch.

Kante's driving run and superb finish from outside the penalty area for Chelsea's second goal capped an all-action performance that has earned him a place in the Matchweek 12 Team of the Week of Shearer, the Premier League's record goalscorer and a Hall of Fame inductee.

🔒 @alanshearer's #PL Team of the Week is locked in 🔒

What do you make of his picks? 👇 pic.twitter.com/ywe4qhnuHp

Emiliano Martinez (AVL)
"Made two important saves from Leandro Trossard and Tariq Lamptey with the score at 0-0 to keep his clean sheet in the eventual 2-0 win over Brighton & Hove Albion."

Antonio Rudiger (CHE)
"Weighed in with a goal and another clean sheet. He didn't put a foot wrong."

Tyrone Mings (AVL)
"A much-improved performance from the centre-half. Assured at the back and netted Aston Villa's second goal."

Joao Cancelo (MCI)
"In the form of his life right now. His delivery for Raheem Sterling's goal in the 3-0 win at home to Everton was the pass of the season. So comfortable on the ball all over the pitch."N’Golo Kante (CHE)
"A superb goal topped off an outstanding midfield display. At the heart of everything good that Chelsea did. Won every tackle and covered every blade of grass."

Tom Cleverley (WAT)
"Dominant in the 4-1 triumph against his former club Manchester United. Bossed the midfield from start to finish."

Rodri (MCI)
"A player on top of his game. Produced a passing masterclass and wonderful goal."

Emmanuel Dennis (WAT)
"Set up Joshua King for Watford's opener and chipped in with another assist for Joao Pedro before netting himself. A top performance in the Hornets' best win of the season."

Christian Benteke (CRY)
"Doubled his tally for the season to four goals with another two in the 3-3 draw at Burnley. Patrick Vieira really is getting the best out of him."

Sadio Mane (LIV)
"Another match, another goal and assist and yet another brilliant performance."Manager: Claudio Ranieri (WAT)
"His players executed his game plan to perfection. They were superb all over the pitch."