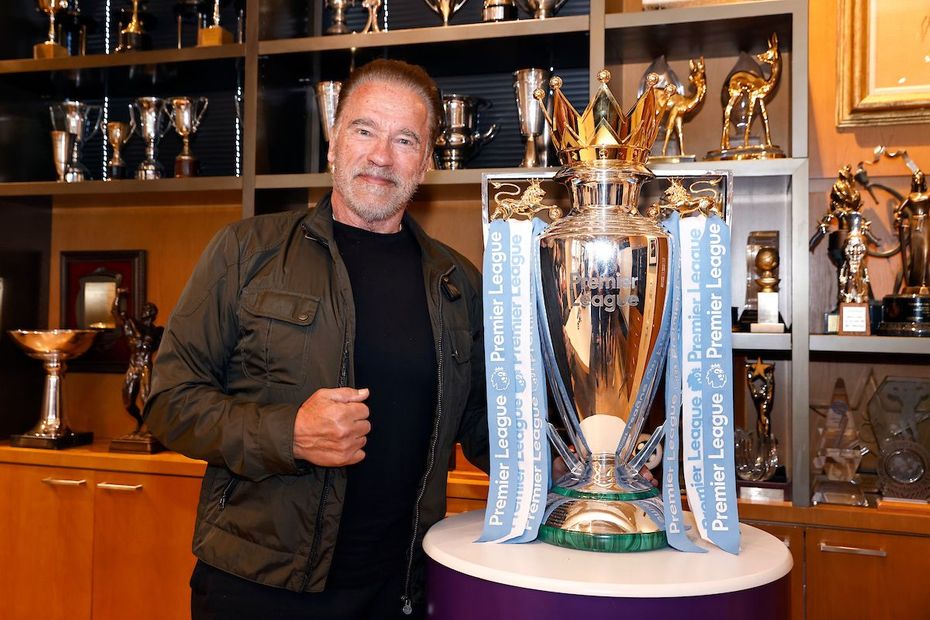 Arnold Schwarzenegger has hailed the positive power that football has on youth ahead of the latest Premier League Mornings Live event in Los Angeles.

The Hollywood actor was visited at his office in Santa Monica, Los Angeles, by the Premier League Trophy and the competition's leading goalscorer Alan Shearer, who is over for the two-day fan fest held at the LA Memorial Coliseum this weekend.

"Soccer is not only a competitive sport, but it is great, great entertainment," Schwarzenegger, who also served as Governor of California, said.

"The millions of people that get entertained every time they watch a soccer game is extraordinary. The amount of joy it brings to the people, the ups and downs, and the rollercoaster ride that we always go through when we watch sports, it's just fantastic.

"I think about the amount of kids sitting there in front of the TV, or live watching the soccer game, and they get inspired to become the future soccer players.

"They're doing something that has to do with fitness, they take care of their bodies. They get inspired by the dedication that these athletes have."

Thousands of Californians inspired by the Premier League are set to descend on the Los Angeles Memorial Coliseum from before 03:00 local time on Saturday as the latest edition of the popular fan fest in association with NBC Sports kicks off.

The NBC team will be joined by special guests throughout the festival. Former Watford captain and US national men's team player Jay DeMerit and actor Brendan Hunt, who plays “Coach Beard” on Ted Lasso are among the famous faces attending the event.

In addition, Matthew Lewis, the actor who played Neville Longbottom in the Harry Potter movies will be in attendance to watch his beloved Leeds United as well as catch up with fans and get involved in some of the free activities.