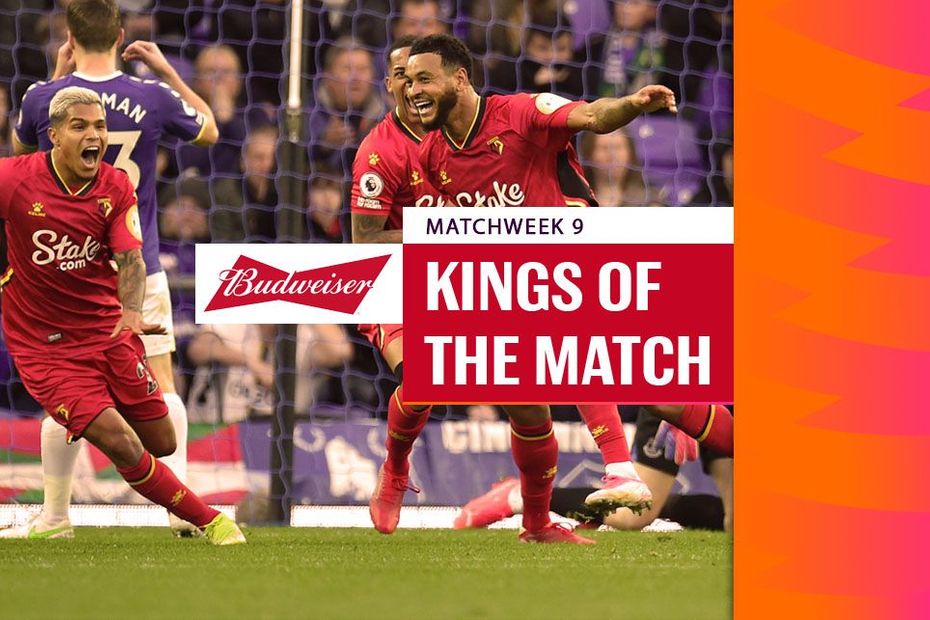 See which players earned the backing of supporters, including Watford's Joshua King

King: “I had a point to prove to myself” External Link
Townsend: Hat-trick hero Mount is leading Chelsea
Lescott: Foden's football IQ is remarkable

After the final whistles in Matchweek 9 of 2021/22, thousands of supporters voted to crown their Budweiser Kings of the Match.

Emile Smith Rowe (ARS)
Produced an assist for Thomas Partey's opener and got on the scoresheet with Arsenal's third to claim over half of the vote.

Mason Mount (CHE)
Scored his first hat-trick for Chelsea and assisted another goal in their comfortable victory over Norwich City at Stamford Bridge.

Joshua King (WAT)
The striker marked his return to Goodison Park with a hat-trick, earning almost two-thirds of the vote.

Hwang Hee-chan (WOL)
Scored the opening goal at Elland Road, his fourth of the season, and posed a threat to Leeds United's defence throughout.

Valentino Livramento (SOU)
The Southampton defender had already struck a post before claiming his first Premier League goal with a powerful header.

Phil Foden (MCI)
Another influential performance from the 21-year-old, who scored twice and assisted another as Manchester City dominated Brighton & Hove Albion.

Youri Tielemans (LEI)
The Belgian hit an unstoppable half-volley into the top corner from 25 yards and then created Leicester City's second goal with a delicious through-ball.

Mohamed Salah (LIV)
The Egyptian gets better with each passing week. A superb hat-trick at Old Trafford earned him an astonishing 91.7 per cent of the vote.