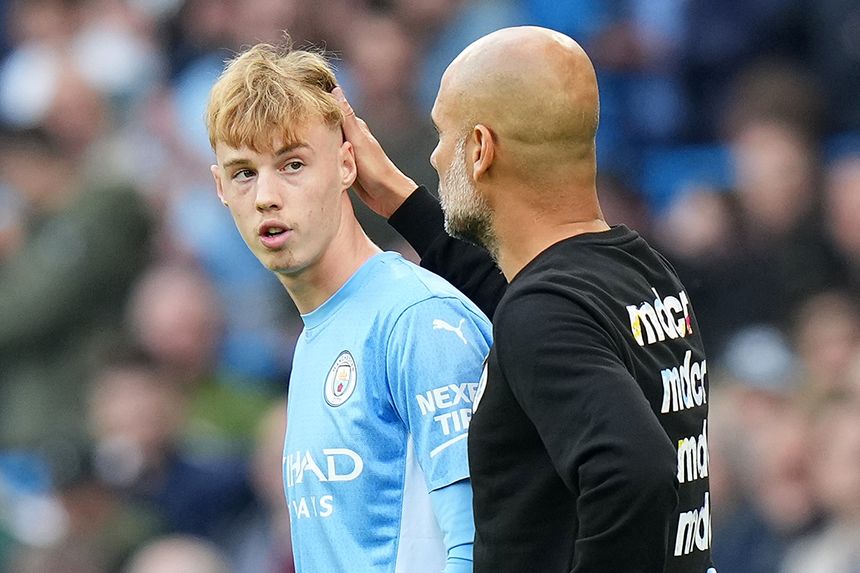 City action man Palmer insists: 'I am doing what I love!' External Link

A second Premier League appearance of his career for the champions by 17:00 BST, and a hat-trick for the Premier League Division 1 title-holders by 21:30. Saturday was a day to remember for Manchester City's Cole Palmer.

The 19-year-old midfielder's busy day kicked into gear when he got the nod from Pep Guardiola to replace Bernardo Silva in second-half stoppage time as the first team beat Burnley 2-0 at the Etihad Stadium.

When you've got a first team game at 3pm and an EDS game at 7:30pm 😅#ManCity pic.twitter.com/Yz7CQZA8NI

Palmer then rushed over to the club's neighbouring Academy Stadium to start in their PL2 home match against Leicester City.

As if that wasn't enough, Palmer scored a hat-trick in a 5-0 win, sealed with a sensational left-footed strike into the top corner from outside the penalty area.

“Playing with the first team at three then driving over to the Academy Stadium and scoring a hat-trick and another three points; it was a good day,” Palmer told City's official website.

A hat-trick secured for the boy 🤩#ManCity pic.twitter.com/VtFIxlqVrz

Juan Familia-Castillo did beat a defender with superb skill before finding the net to give the home fans something to cheer later on, but Villa held on to stay third in Division 2 with victory.

In Division 1, Evan Ferguson celebrated his 17th birthday three days early as he scored both of Brighton & Hove Albion's goals in their 2-1 Division win over Crystal Palace on Saturday.

Ferguson dispatched a penalty kick before his quick thinking and clinical finishing punished a defensive error by the Eagles.

A special long-range strike by Jonathon Page was the pick of Fulham's goals in a 3-0 Division 2 triumph over Reading.