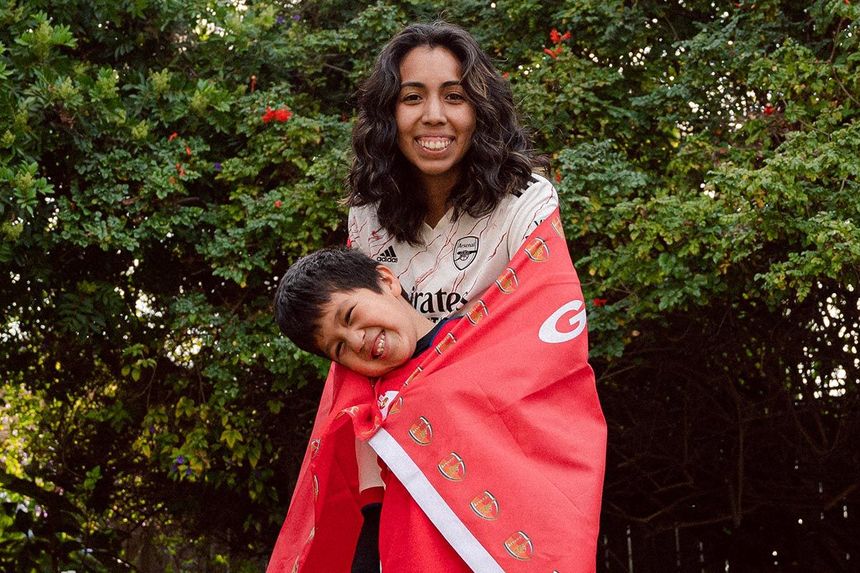 Meet Amelia from Los Angeles, whose passion for soccer and her family knows no bounds, especially when they come together.

"My brother described watching Arsenal to me as feeling the same intensity and passion he felt while rooting for the Mexican national team.

"So like the good independent woman I am, I do everything my older brother does. His origin story is my origin story.

"I have three brothers, plus myself. We're all Arsenal fans.

"Soccer in general, being Mexican-Americans, connects us naturally. So we've definitely had that, ‘I'm not living in that place, but still feel that intensity,’ kind of thing with the Mexican national team and we feel the same way with Arsenal.

"When my family isn’t able to get together to watch the games, we’ll always text each other. Here on the west coast, we’re getting up at like four o’clock in the morning, so if for some reason I don’t wake up because of my job or my kids, I’ll have a play-by-play ready in our group chat.

"I'm a single mom. It's just me, my children, and my brothers. So I think in that realm, soccer is something that very much connects me to my family.

"One of my sons is non-verbal, but he wears the Arsenal kit and I'll ask him, ‘Where's Arsenal?’ and he points to the emblem.

"My younger son, who’s a chatterbox for all three of us, he'll be like, ‘Which one are they, are they the red team? Are they the white team?’

"You know, and he'll say, ‘Oh, look, they score it.’ And even if he's not super into it, he understands it.

"That's what supporting Arsenal is about. It's just creating that connection to my kids so if they're far away from me, they'll remember me in that capacity.

"I had just given birth to my youngest son, Oliver, on 24 September. The following day, Arsenal faced Leicester City so I had my brother bring me my laptop.

"I have an Instagram boomerang of me in my bed with a newborn Oliver, and I have Leicester vs Arsenal on my laptop and Alexis Sanchez scored a hat trick. I think they won 5-2.

"I remember just looking at him and being like, 'I don't know what the world has for us in the future, but this is it kid, soccer is what we're about in this family.'"

The Premier League Mornings Live fan festival comes to the West Coast of the United States for the first time, travelling to Los Angeles, California, on 23-24 October and Amelia can't wait.

"I think it’s fantastic, and long overdue, to see the Premier League making its way to the West Coast!

"We’re the ones waking up at the crack of dawn to support this league and our teams and I think the league is going to be very happy to see that incredible support from the diverse and energetic LA community in October."