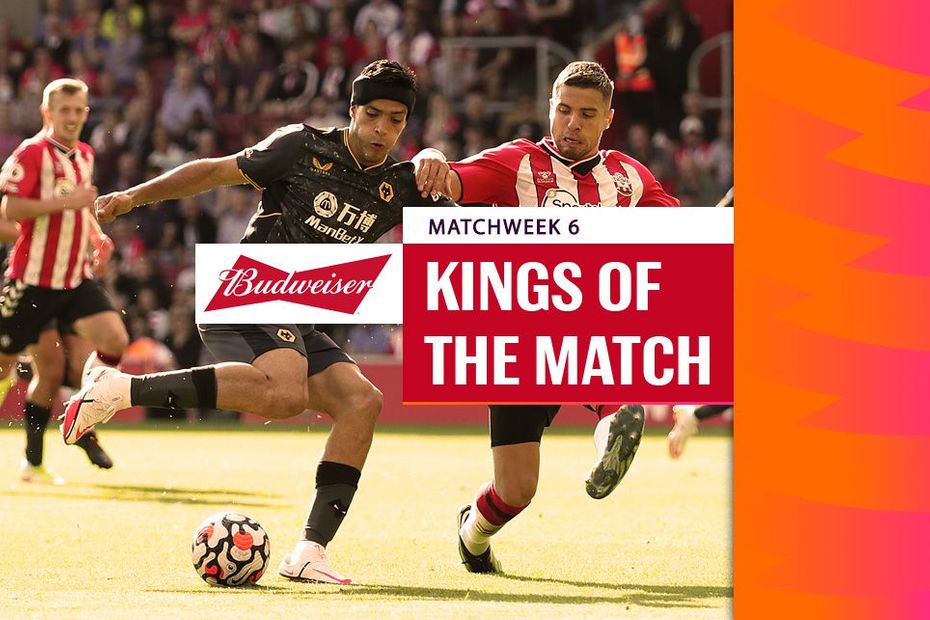 See which players have earned the backing of supporters, including Wolves' Raul Jimenez

Lage | 'These three points are for the fans' External Link

After the final whistles in Matchweek 6 of 2021/22, thousands of supporters voted to crown their Budweiser Kings of the Match.

See who came out on top and click on the match widgets to find out how the voting went.

The Brazilian scored the winner from one of his two shots on target, while his ferocious pressing helped to keep Chelsea pinned in their own half.

In his first Premier League start of the season, the Aston Villa defender scored the decisive goal while helping his side to a clean sheet at Old Trafford.

Taking over half of the vote, the Everton midfielder put in an all-action display and scored his side's second goal at Goodison Park.

West Ham United's striker was a constant threat on his return from suspension, creating chances in addition to his own goal attempts. He finally got his rewards with a well-taken late winner, hitting his fifth goal in five matches.

The striker was in the the thick of the action at King Power Stadium, scoring an own goal before clinically netting twice at the right end. He took over 70 per cent of the vote.

Sarr's fourth goal of the season earned Watford a point at home and gave him almost half of the vote.

The Portuguese delivered another impressive attacking display, scoring his third goal of the season and only being denied another by a superb David Raya save. He was also a creative influence, laying on a big chance for Mohamed Salah and playing two key passes.

He scored his first Premier League goal since fracturing his skull in November 2020, and he did it in style. Jimenez showed his strength to win a tussle and latch on to a long ball before displaying his skill to bamboozle Southampton's covering defenders and finish coolly.

The 20-year-old sparkled on the right flank, laying on the opener for Emile Smith Rowe and then netting himself. He became the youngest ever Premier League player to both score and assist in the north London derby.

In a close-fought race, the Brighton & Hove Albion centre-back edged out Wilfried Zaha, who opened the scoring, to win the vote.