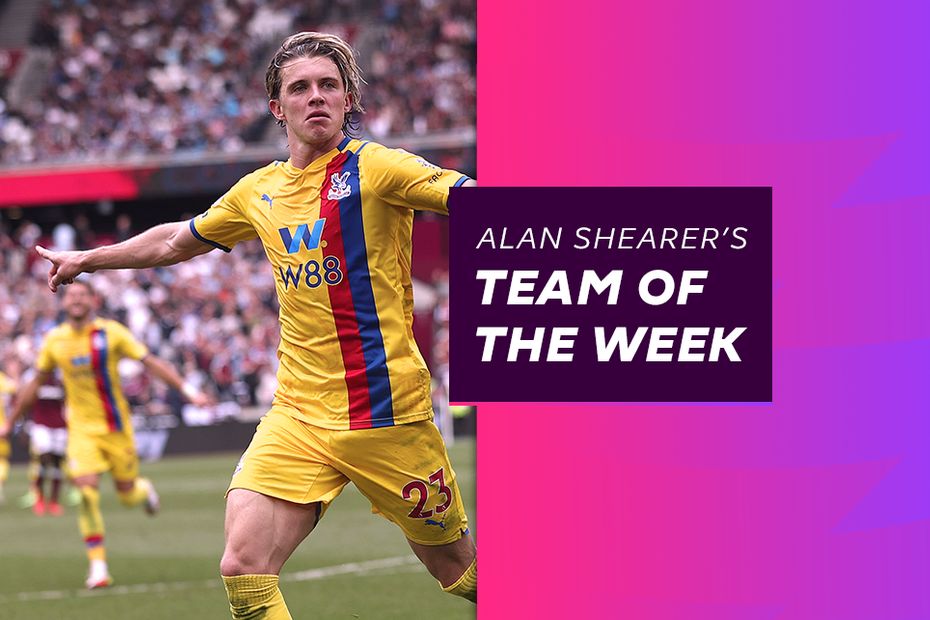 Gallagher reveals how much it meant to score in front of the fans External Link
Carney: Varane brings winning mentality
Budweiser Kings of the Match: Matchweek 3

Few people expected Crystal Palace to come away with a point from their trip to an in-form West Ham United side, but thanks to an inspirational display by Conor Gallagher, the Eagles were unlucky not to emerge with a victory.

Gallagher impressed while on loan at West Bromwich Albion from Chelsea last season and the midfielder appears to be growing in stature this season, according to Alan Shearer.

Given a free role by Palace manager Patrick Vieira, the 21-year-old loanee scored two superbly taken goals to earn Palace a thrilling 2-2 draw with the league leaders and cement a place for himself in Hall of Fame inductee Shearer's Matchweek 3 Team of the Week.

Would you make any changes? 🔄 pic.twitter.com/BHlBnoGwYf

The Spaniard kept Manchester United in the match with a fine display including a double-save to remember against Wolverhampton Wanderers.

Oozed class and was calmness personified under pressure as Wolves mounted several attacks. Not a bad start to his Premier League career.

Stood firm all game particularly in the second half when down to 10 men.

Tough in the tackle, strong in the air and showed good recovery pace as Chelsea defended as if their lives depended on it at Anfield.

With two well-taken goals against an in-form Hammers side, the impressive Gallagher showed he is going from strength to strength.

Put in a solid shift in the middle as Tottenham Hotspur ground out their third successive victory to go top of the league.

He provided great protection and bossed the middle of the park for Everton.

Got the scoring under way and ran the midfield as the champions ran riot against Arsenal for their third 5-0 home league win in a row.

Justified Pep Guardiola's continued faith in him with a goal as well as another superb assist - his third of the season.

The Spaniard showed great movement as he scored twice and produced an assist.

Another goal and another very good performance from the summer signing. Was a threat throughout.