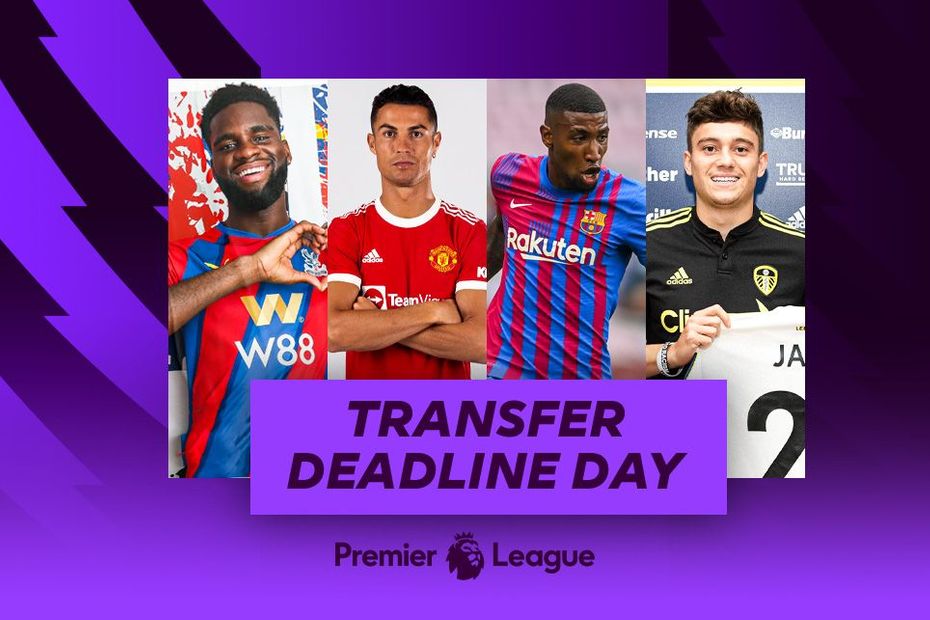 The summer transfer window for Premier League clubs closed at 23:00 BST on 31 August. See all the deals that were agreed on a busy final day.

See: Summer transfers - all the deals

The key deals on Deadline Day

00:15 Leeds United winger Helder Costa is heading to Valencia on loan, with an option for a permanent move at the end of the season. Details

23:45 Chelsea have signed Spain international midfielder Saul Niguez from Atletico Madrid on a season-long loan with the option of a permanent transfer next summer.

The 26-year-old helped Atletico win the Spanish league title last season, playing in 33 of their 38 matches, while he has also twice been a UEFA Europa League winner.

Chelsea director Marina Granovskaia told the club's official website: "He is a proven winner, a player with huge experience and we know he will be very well-suited to the challenges that face us on all fronts in the coming year." Details

We’re delighted to welcome @saulniguez to the club on a season-long loan! ✍️#HolaSaul 🇪🇸

23:30 Brighton & Hove Albion centre-back Lars Dendoncker heads to Scottish side St Johnstone for the rest of the season. Details

23:18 Arsenal Academy defender Jonathan Dinzeyi is off to Carlisle United for a season-long loan spell. Details

23:14 Southampton Academy graduate Michael Obafemi has left the club, with the striker completing a permanent transfer to Swansea City. Details

However, clubs can still complete transfers after 2300 BST if they have submitted a deal sheet before the deadline

The 31-year-old, who played for Rafael Benitez at Newcastle, has signed a two-year contract with the option for a third. He has played 140 Premier League matches to date, scoring 35 goals and adding 14 assists.

Rondon told Everton's official website: “I can’t wait to pull on the shirt and be reunited with Rafa Benitez, a coach who has changed the way I understand the game. I’m really grateful for the faith he’s shown in me.” Details

23:00 Manchester City have loaned both Philippe Sandler and Patrick Roberts to French side Troyes for the season. Details

23:00 Brighton & Hove Albion's Moises Caicedo will spend the rest of the season with Beerschot in Belgium. Details

23:00 Burnley defender Richard Nartey is heading out on loan to Mansfield Town. Details

The 22-year-old has made 63 appearances in his two seasons with Bologna and has 23 international caps.

Arsenal head coach Mikel Arteta told the club's official website: "He’s a versatile defender with great defensive qualities, high technical ability and composure on the ball. He will be an important member of our squad." Details

22:45 Liverpool forward Sheyi Ojo will spend the rest of the campaign in the Championship with Millwall. Details

22:12 Brentford's 20-year-old midfielder Jaakko Oksanen is heading to Scotland to play on loan for Greenock Morton until 3 January. Details

22:00 Only one hour to go until the deadline! Will there be any late signings?

21:50 Crystal Palace have signed Odsonne Edouard from Celtic on a four-year deal.

The 23-year-old striker scored 22 goals in 40 appearances in all competitions last season, and has struck three times this term. In total, he hit 86 goals in 179 matches for Celtic.

Palace chairman Steve Parish told the club's official website: “Odsonne is a player of proven quality. He was a player in high demand and I’m delighted he chose to join Crystal Palace as another fantastic addition to our squad.” Details

An incredible talent. An iconic chant.

21:30 Newcastle United youngster Rodrigo Vilca will spend the first half of the season on loan with Doncaster Rovers, until January. Details

20:35 West Ham United have signed Czech Republic international Alex Kral on a season-long loan from Spartak Moscow, with a view to making the move permanent.

A deep-lying midfielder, the 23-year-old played in four of his country's five matches at UEFA Euro 2020.

West Ham manager David Moyes told the club's official website: "He will provide good competition in the centre of midfield. He is another young, talented player who we feel has a big potential and will be capable of adapting to the demands of the Premier League." Details

20:00 Liverpool's academy midfielder Luis Longstaff will test himself in Scotland this season, having agreed a loan move to Queen's Park. Details

19:45 Brentford's 19-year-old midfielder Alex Gilbert is going to spend the season on loan with League Two side Swindon Town. Details

19:30 Andre Gray leaves Watford on loan, joining Queens Park Rangers and linking up again with Mark Warburton, who was his manager at Brentford. Details

Two other players are also on their way out of Vicarage Road, with Jaime Alvarado heading to Racing de Ferrol on loan and Marc Navarro leaving the Hornets permanently. Details

19:05 Two players have left Aston Villa on loan to spend the season in France.

Frederic Guilbert has returned to Strasbourg, where he spent the second half of the last campaign. Details

19:03 Spurs' new signing Emerson Royal is thrilled to be playing in the Premier League.

19:00 Manchester City's 19-year-old midfielder Tommy Doyle will spend the rest of the season in Germany with Hamburg. Details

18:40 Ethan Ampadu has signed a new three-year deal with Chelsea and will spend this season on loan with Italian side Venezia. Details

The 22-year-old, who played in July's Copa America final against Argentina, has signed a five-year contract and will wear the No 12 shirt. Details

The 23-year-old joins his third Premier League club after making a total of 70 appearances in the competition for Everton and Fulham.

18:00 Norwich City defender Timm Klose has left the club after a mutual agreement was reached to cancel his contract. Details

17:45 Wolverhampton Wanderers are planning for the future after snapping up Manchester City's 17-year-old defensive midfielder Harvey Griffiths on a permanent deal. Details

17:30 Brighton & Hove Albion have signed 20-year-old striker Abdallah Sima from Slavia Prague on a four-year deal and immediately sent him out on loan to Stoke City.

The Senegal international scored 16 goals in 33 appearances for Slavia in all competitions last season. Details

16:30 Brighton & Hove Albion's 20-year-old midfielder Reda Khadra will spend the rest of the campaign on loan in the Championship with Blackburn Rovers. Details

Leeds' director of football Victor Orta said: “It is no secret that Daniel is a player we have been keen to acquire for a number of years and today we achieved our goal.

“As a player we feel Daniel is an excellent fit for a Marcelo Bielsa team. He is quick, direct and works hard – we look forward to him joining up with the squad, finally!” Details

📞 The call has been answered! pic.twitter.com/u9j9YG5FUT

16:05 Chelsea's 19-year-old academy forward Thierno Ballo will spend the season on loan with Rapid Vienna in the Austrian Bundesliga. Details

Munoz joins the Magpies' academy on an 18-month loan deal with an option for a permanent deal. He scored three goals and added three assists in his 13 league matches for his club. Details

14:48 Is Nikola Vlasic going into your FPL team? He's a midfielder in the game and priced at £6.0m following his Deadline Day transfer to West Ham.

13:35 Burnley have secured the signing of Wales international Connor Roberts from Swansea City.

13:00 It's official! Cristiano Ronaldo is back in Fantasy Premier League and yours to own for £12.5m.

Burnley have also announced that their recent signing Maxwel Cornet is available in the game as a midfielder for £6.0m. More

09:45 Everton forward Moise Kean re-joins Juventus on a two-year loan deal with an obligation for the Italian club to make the transfer permanent. Details

09:30 It's a done deal! Cristiano Ronaldo returns to Manchester United from Juventus on a two-year deal with the option of another 12 months, subject to international clearance. Details

09:03 Chelsea defender Dujon Sterling has signed a new contract with the club before joining Championship club Blackpool on a season-long loan. Details

09:00 We have our first signing of Deadline Day for the 2021 summer transfer window. West Ham United have announced the signing of Croatia forward Nikola Vlasic, formerly of Everton. The 23-year-old arrives on a five-year-deal from Russian side CSKA Moscow. Details