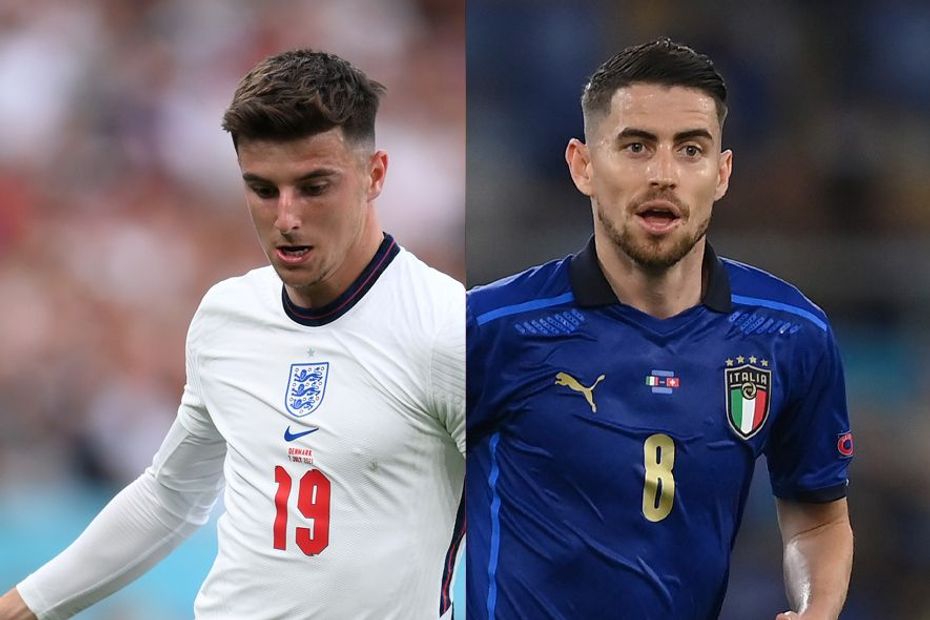 Arsenal winger Bukayo Saka will hope to start on the right of the Three Lions' attack and find a way past Chelsea’s Emerson Palmieri, who is now starting at left-back for the Azzurri.

Meanwhile, Chelsea midfielders Mason Mount and Jorginho are set to go head-to-head, with England’s No 10 taking on Italy’s deep-lying playmaker.

Although the duo worked together to help Chelsea win the UEFA Champions League in May, they will be direct opponents at Wembley Stadium.

The pair will know their battle in the centre of the pitch could be crucial, and will use their knowledge of each other to try to gain the upper hand.

Mount has started England’s last two matches against Ukraine and Denmark, earning his spot after a meteoric rise with Chelsea over the last two seasons.

His breakthrough campaign under Frank Lampard in 2019/20 was impressive enough, but he has continued to evolve and cement his status as the Blues’ most creative player.

Indeed, Mount was among the top five Premier League midfielders for a range of statistics last season, including shots and chances created.

The 22-year-old was joint-top for chances created from set-pieces in 2020/21 and has put that prowess to good use for England at Euro 2020, delivering the corner from which Jordan Henderson scored his goal against Ukraine in the quarter-finals.

Jorginho will know he has to keep a close eye on Mount in front of Italy’s defence.

But the 29-year-old will also be aiming to get on the ball himself and make his club colleague do the chasing.

After all, Jorginho’s metronomic passing is as important to his national team as it is to Chelsea.

He averaged 80 passes per 90 minutes for Chelsea last season, putting him among the top six Premier League midfielders, while he boasted a passing accuracy of 89 per cent.

Jorginho is also the main penalty-taker for both club and country.

He converted seven penalties for Chelsea in the Premier League last season, including one past Everton and England goalkeeper Jordan Pickford in March.

Indeed, those spot-kicks helped him finish one goal ahead of Mount's total of six from last season.

In total, Jorginho has been successful with 11 of his 13 spot-kicks in the competition, a success rate of 85 per cent.

It was Jorginho who scored Italy’s winning penalty as they beat Spain in a shootout in the semi-final. If Sunday’s match also goes all the way, he could have the final say once again.