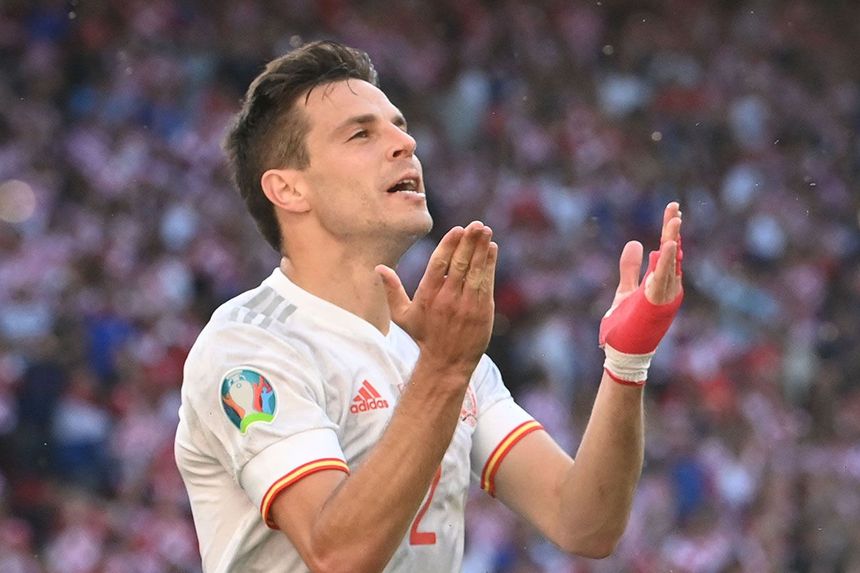 Cesar Azpilicueta and Ferran Torres were both on target as Spain reached the quarter-finals of UEFA Euro 2020 with a thrilling 5-3 victory over Croatia.

Chelsea defender Azpilicueta headed in from Torres' cross to put his side 2-1 in front, scoring his first international goal, and Manchester City winger Torres then appeared to have made the match safe on 77 minutes.

However, Croatia struck twice in the last five minutes to make it 3-3 and force extra time.

It ends #CRO 3-5 #ESP after going to extra time, sending Spain through to the quarter-finals! @FerranTorres20: Goal and assist, subbed off at 88'@Laporte: Played the full game
Rodrigo: Subbed on at 101'

Hugo Lloris saved from the spot and Paul Pogba scored one of the goals of the tournament but France were knocked out on penalties by Switzerland following a 3-3 draw after extra-time.

With his side trailing 1-0 in normal time, Tottenham Hotspur goalkeeper Lloris saved Ricardo Rodriguez's penalty to keep France in the match.

Les Bleus then went 3-1 up through Karim Benzema's quickfire double and a curling shot into the top corner by Manchester United midfielder Pogba.

Congratulations, Granit - past France and into the quarter-finals! 👏#SUI | #EURO2020 pic.twitter.com/KZpzRWIEck

But Switzerland hit back with two goals in the last 10 minutes, including a 90th-minute equaliser set up by Arsenal's Granit Xhaka, who was voted man of the match.

A Switzerland side including Liverpool's Xherdan Shaqiri and Newcastle United defender Fabian Schar ran out 5-4 winners in the penalty shootout to set up a quarter-final meeting with Spain.