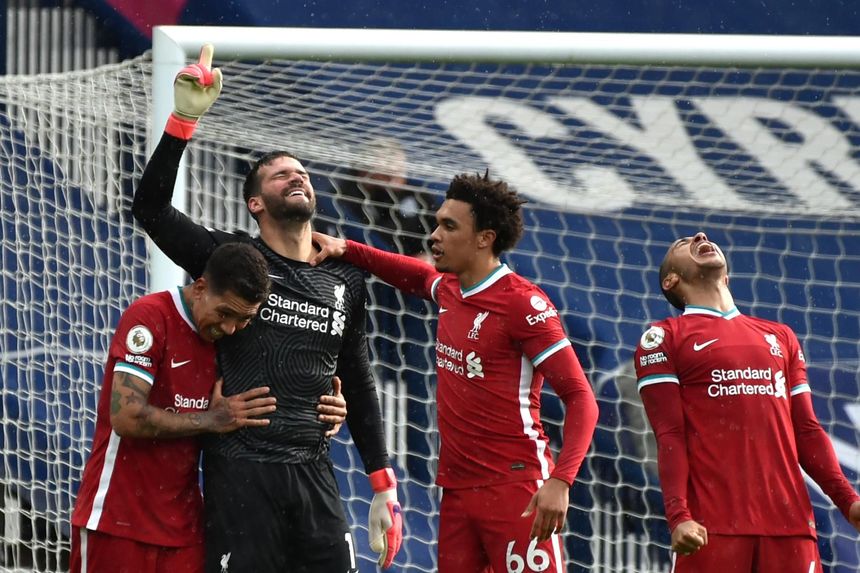 Alisson Becker: That goal was for my family and teammates External Link

Alisson Becker stunned West Bromwich Albion with a last-gasp winner for Liverpool on Sunday and in doing so became the sixth goalkeeper to score in Premier League history.

The Brazilian came up for a corner in the fifth minute of stoppage time and headed past Sam Johnstone to move the Reds within one point of fourth-placed Chelsea as they make a final push for UEFA Champions League qualification.

"I'm too emotional these last months for everything that happened with me, with my family," Alisson told Sky Sports after the match as he dedicated the goal to his father, who died in February.

Experience 5 minutes 33 seconds of unbridled joy with every angle of @Alissonbecker's goal... pic.twitter.com/QlgWJQ9QcA

"It's for my family, for the boys. What a fight, sometimes we are fighting and fighting and things are just not happening as this afternoon here.

"Just scoring this goal, I'm really, really happy to help them because they fight a lot, we fight a lot together and we have a strong goal to achieve the Champions League because we won it once and you know that everything started with qualification."

Alisson is the first goalkeeper to score a competitive goal for Liverpool in their history and is also the first to score with a header in the Premier League.

He is also the first Premier League goalkeeper to score a winning goal.

Goalkeepers scoring in the PL

Peter Schmeichel was the first to score in the Premier League, volleying in for Aston Villa at Everton in October 2001 in the 90th minute of a 3-2 defeat.

Blackburn Rovers' Brad Friedel was next, netting from close range at Charlton Athletic.

Then, Paul Robinson's free-kick from deep inside his own half bounced over Ben Foster to help Tottenham Hotspur beat Watford 3-1 in March 2007.

The other two goalscoring 'keepers found the net with goal-kicks in windy conditions.

Tim Howard's long punt flew over Adam Bogdan for Everton versus Bolton Wanderers in January 2012, while Asmir Begovic struck for Stoke City 13 seconds into their 1-1 draw with Southampton in November 2013.