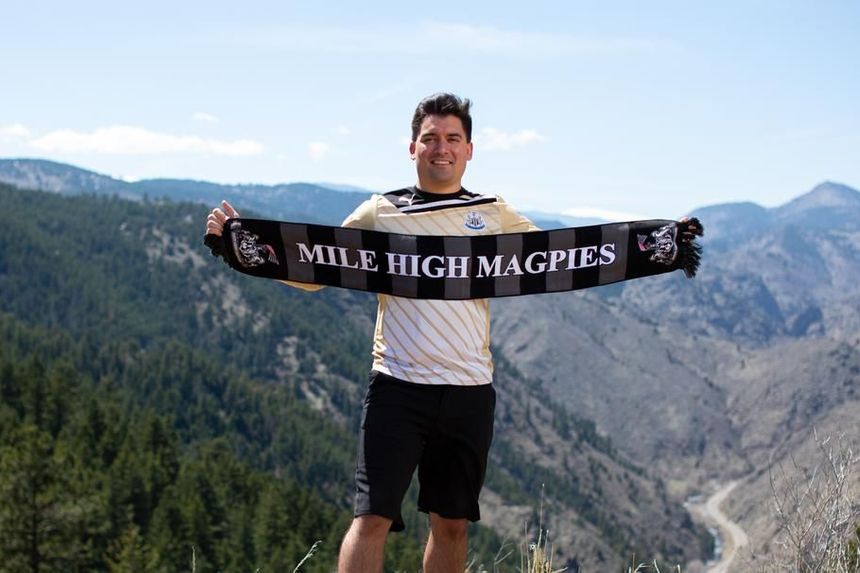 Meet Tony, a Denver-based Newcastle United fan who has lived across the country and taken his love of the club to every destination.

"When I went to England, I spent about £300 in the team shop back in 2016. And my buddy's like, 'Did you buy enough stuff? Did you want any more? You know, I don't think you brought the whole store.'

"But I probably could have even done more. I was like a kid at a candy store. I’ve got at least 10 shirts now.

"The first thing people always ask me is, 'Why Newcastle?' or 'How much stuff do you have?' and 'Do you have any regular clothes?'

"Yes, I have regular clothes. But given the opportunity to wear it, I’ll always take the chance to do it.

"Then, in public, people are like, 'What, is that Footlocker?' and like, 'No, let's just stop that right there.'

"I got custom license plates, too, when I lived in Illinois, and I have one here in Denver now. I always get asked though what it means, and even my dad was like, 'Why are you getting a custom license?' I paid a lot for it, but it was totally worth it.

"I live in Denver now, but I’ve lived in cities all over the country, and I always try to go out and watch games or get people together.

"When I lived in Florida I actually found a bar in Sarasota that was run by a Geordie. Even though it was 75 miles away, I made the trip there a couple of times.

"In Tampa, I tried to get friends to go with me to the bar because there weren’t any other Newcastle fans there.

"I would just give them shirts just to come with me. In St. Louis, it was tough because a lot of the Newcastle fans were scattered. But it was always the one thing we would meet up to do.

"Now it’s the same in Denver. I just am always hoping to meet more people that way, it’s like all sports where you find like-minded people and build it from there so it grows beyond just being together at the pub at 06:30.

"I've just met with people and even watched the World Cup final in St. Louis with a massive block party of people from all different walks of life, and it’s like, this is all just a blast.

"Supporting a team out west here is definitely different. It’s different on the East Coast, where you can make it a lunch or mid-breakfast thing, or even sleep in a bit. But here, we have kick-offs sometimes that are 05:00 or 05:30.

"I’ve had poker nights where I have to leave my friends just so I would be able to get up at 4:50 to roll out of bed, go on my couch and turn on the TV because I’m like, 'Well, we have to beat Burnley today.'

"I’ve cancelled picking up shifts at certain positions, I’ve planned so much stuff around this. It’s a community out here of like-minded people, you’re a special breed.

"So many people are like, 'I would rather spend my Sunday morning hiking' but I would rather get up before sunrise and watch a team seven time zones away.”