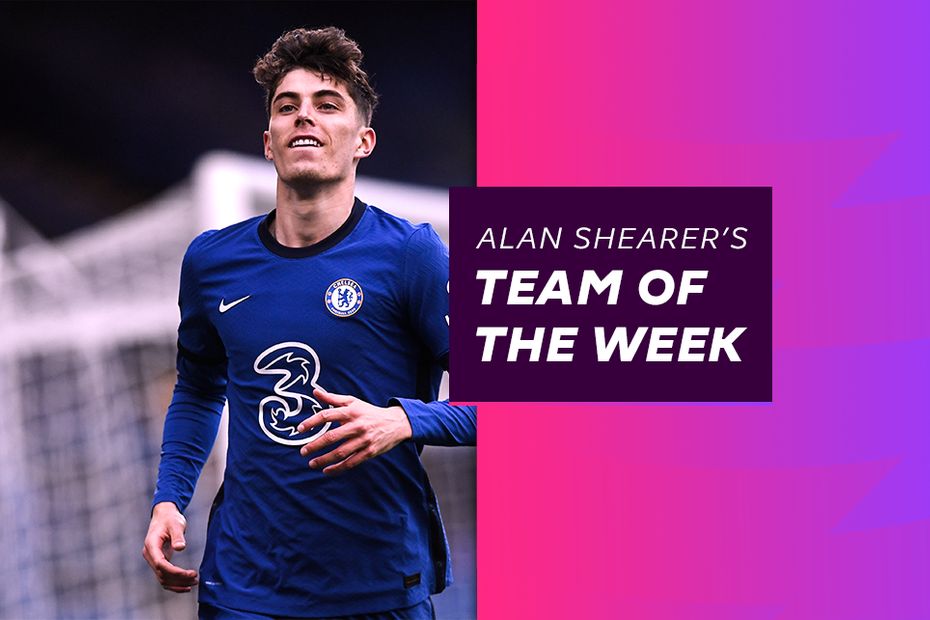 Hoddle: There's much more to come from Havertz

Mendy: We will see the best of Timo and Kai External Link

The German revolution continues at Chelsea, with Kai Havertz becoming an increasingly influential player under his head coach and countryman Thomas Tuchel.

After taking time to adapt to the Premier League, a move up front has helped the 21-year-old to shine, and he starred in Saturday's victory over Fulham, scoring both of his side's goals.

Inaugural Premier League Hall of Fame inductee Alan Shearer is pleased to see Havertz now showcasing his ability, and has named him in his Team of the Week.

🔄 Would you make any changes? 🔄 pic.twitter.com/4unGWhK362

Serge Aurier (TOT) | TOT 4-0 SHU
"His ball over the top for Gareth Bale’s opening goal was superb, and he added another assist while also playing his part in a clean sheet."

Jonny Evans (LEI) | SOU 1-1 LEI
"With his team-mates struggling to break down 10-man Southampton, he stepped up to the plate and headed in his second goal in three matches."

Fernandinho (MCI) | CRY 0-2 MCI
"Palace can be so dangerous on the break, but he barely gave them a sniff of an opening."

James Ward-Prowse (SOU) | SOU 1-1 LEI
"Led by example as Southampton defended valiantly for 80 minutes with 10 men, and he converted his penalty superbly."

Gareth Bale (TOT) | TOT 4-0 SHU
"This is what we all wanted to see when he returned to the Premier League. He looks back to his best after this brilliant hat-trick."

Kai Havertz (CHE) | CHE 2-0 FUL
"He is showing what he is capable of now, with his classy touches and two more goals."

Son Heung-min (TOT) | TOT 4-0 SHU
"Showed his threat on the break to set up Bale’s second goal, and his clinical finishing ability with his long-range strike. He nearly scored another too."