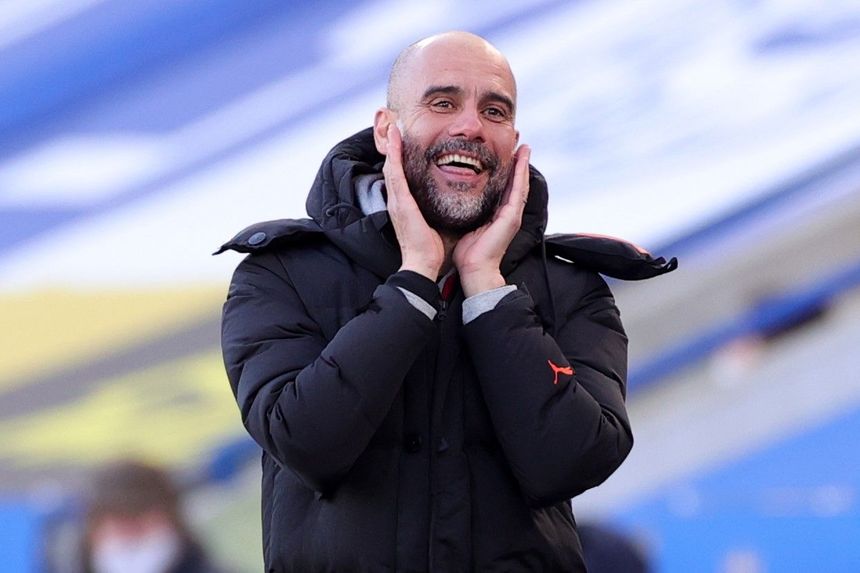 Guardiola: I cannot wait to celebrate with our fans! External Link
Manchester City's 2020/21 title win by numbers
Owen: Guardiola is the best in the world

Manchester City manager Pep Guardiola says his team becoming 2020/21 Premier League champions has been the hardest of the three titles he has won with the club.

A fifth title for Man City was confirmed after Manchester United were beaten at home by Leicester City to go 10 points adrift of the leaders with only three matches to play.

It means City are now the joint-second most successful club in the competition's history, having matched Chelsea's five PL Trophies. Only Man Utd, with 13, have won more.

"This has been a season and a Premier League title like no other," Guardiola told the club's official website. "This was the hardest one.

"We will always remember this season for the way that we won. I am so proud to be the manager here and of this group of players."

City claimed the title despite being eighth on Christmas, the joint-lowest a side have been at that stage of a season before going on to lift the trophy.

They now have the chance of adding a first UEFA Champions League trophy to that of the Premier League and EFL Cup claimed this season, but Guardiola says the domestic league has always been his priority.

“At the start of every season, the Premier League is the most important title for us," he said. "This is the one where you have to be there every three days, playing all your rivals home and away.

"Only by being the very best, week in week out, can you win this competition. It is a huge success."

The Spaniard triumphed this season with a different set of tactics from previous successes, creating a 2020/21 team with greater defensive solidity.

"It's amazing what Pep's able to do," Hargreaves said. "I don't think anybody could have said [last season that] Pep would have the best defence in the Premier League.

"To have the fewest goals conceded. To have dominated in a different way without a centre-forward has been quite remarkable.

"He is the ultimate innovator. We saw it again this season."