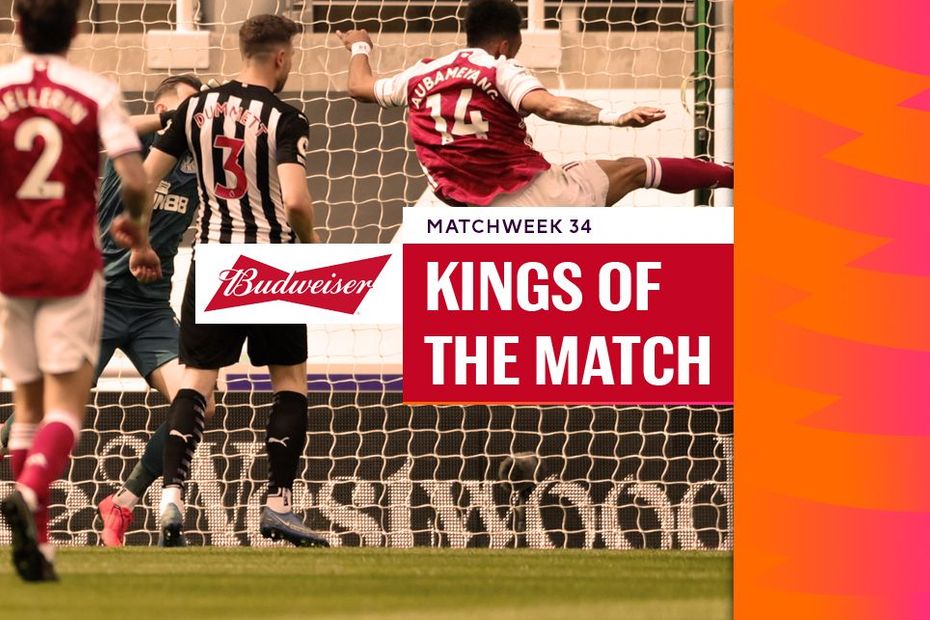 See which players earned the backing of supporters, including Arsenal's Pierre-Emerick Aubameyang

Owen: Arsenal can call on Aubameyang for big goals
Nominees to join Hall of Fame in 2021
2021 Hall of Fame nominee: Ian Wright

Supporters voted in their thousands to crown their Budweiser Kings of the Match in Matchweek 34.

The Leicester City forward provided the assist for Jonny Evans' leveller to earn 71.4 per cent of the vote.

Marked his return to the side with the first goal at Selhurst Park as Manchester City took a step closer to the Premier League title.

Claimed 51.7 per cent of the vote for a composed defensive display as Brighton & Hove Albion recorded a clean sheet in their crucial 2-0 win over Leeds United.

A first PL double for the German boosted Chelsea's hopes of a top-four finish.

Scored the opener for Aston Villa with his 13th goal of the season to earn a majority 68.3 per cent of the vote.

Marked his first PL appearance in nearly a month with an acrobatic strike to make the points safe with Arsenal's second at St James' Park.

Created one and completed the scoring as Tottenham Hotspur kept their top-four hopes alive with a resounding victory.

The Wolverhampton Wanderers defender performed admirably and also went close to opening the scoring with a fierce shot as he pipped goalscorer Mbaye Diagne in the King of the Match vote.

There was a clear winner for the King of the Match at Turf Moor as the forward's double helped West Ham United come from behind to win.