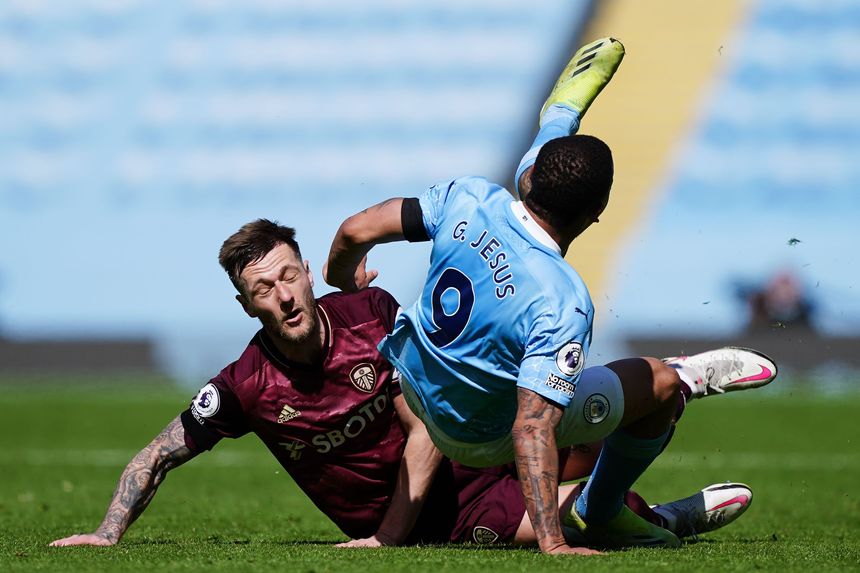 Incident: Leeds United captain Liam Cooper is shown a red card by the referee for a challenge on Manchester City striker Gabriel Jesus after the Video Assistant Referee recommended a review.

Foy’s view: This was excellent use of VAR and consistent with red cards we have seen this season. The challenge demonstrated excessive force and endangered the safety of an opponent. It was difficult for the referee to identify the intensity and nature of the contact in real time, but the VAR was able to intervene and advise the referee to take another look.

Incident: Newcastle United are denied a penalty after Burnley's James Tarkowski inadvertently kicks Sean Longstaff in the head while clearing the ball in his penalty area.

Foy’s view: Even though Tarkowski is unaware of Longstaff’s proximity, the defender always still has a responsibility to demonstrate care for his opponent.

Given the height of the ball, this was a careless challenge. He does make contact with ball first, but then there is careless clear contact with Longstaff’s head.

The referee didn’t feel it was a penalty in real time, and the VAR didn’t view that decision as a clear and obvious error. But the expectation going forward is that a penalty should be awarded.

Incident: Manchester United striker Edinson Cavani had a goal disallowed after the VAR spotted a flailing arm from Scott McTominay on Tottenham Hotspur's Son Heung-min in the build-up.

Foy’s view: After every goal the VAR will check the attacking possession phase (APP), to see if there has been an infringement in the build-up. On this occasion, the VAR considered the movement of McTominay’s hand into Son’s face to be a careless act and advised the referee to look at it again.

On going to the screen, the referee thought it was a foul, but not reckless, so not worthy of a second yellow card.

Son’s initial action led to the reaction from McTominay so for me, the best option would be to stay with on-field decision and not get VAR involved.

Incident: West Bromwich Albion's Mbaye Diagne was denied the opening goal against Southampton after being flagged offside, and the VAR stuck with the on-field decision.

Foy’s view: This was a really interesting incident, and a reminder that you can’t always legislate for every eventuality with VAR. The on-field decision was offside, and you can understand why the flag has gone up, as to the naked eye it does look offside.

However, the replays do appear to show Diagne stood in an onside position – his feet are certainly onside. Unfortunately, his upper body is blocked by his team-mate Kyle Bartley, and the VAR cannot satisfactorily draw the offside lines with a degree of certainty.

What he can’t do is guess, and so the on-field decision of offside remained.