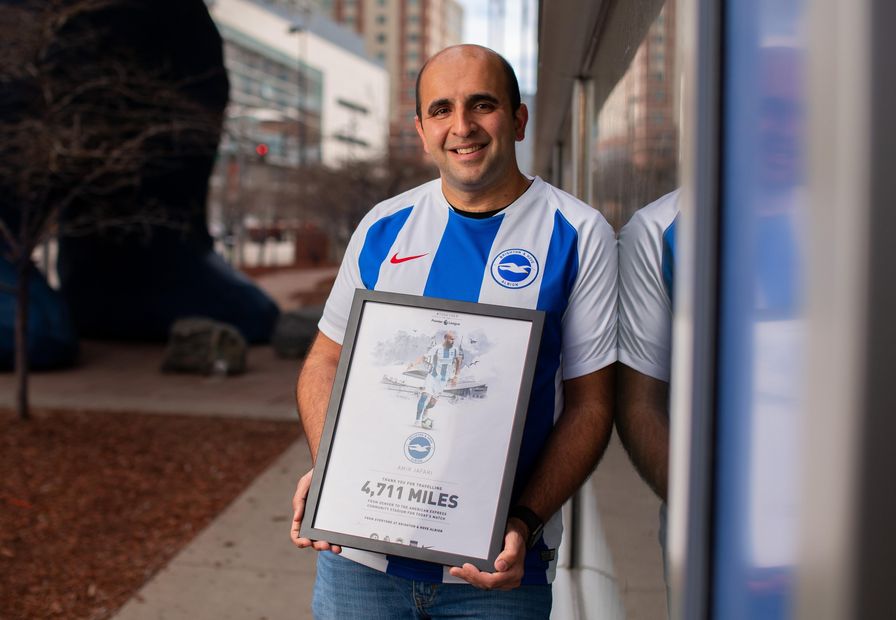 Meet Amir, a Brighton & Hove Albion fan in Denver who found a new community 4,711 miles away in England, and also in his own backyard.

"In 2018, I had a resident in my hospital who was a passionate Chelsea fan and really introduced me to the Premier League.

"At the time, I knew very little of it and watched sparingly. I was never a fan of big teams in any sport in the NFL, NBA, or college football, so I knew I was not going to jump on the bandwagon with Manchester City, Liverpool or Manchester United.

"About a week after trying to find a team, Brighton signed Alireza Jahanbakhsh from Iran, the country I was born in. The more I read about the history of the Albion, the more I was hooked.

"That very same day I went on the club’s website and purchased my first kit. What followed next was nothing short of amazing.

"In spring 2019, I went to Brighton to explore the city and see a match. Before the trip, I emailed the club - expecting absolutely nothing - to let them know how excited I was.

"To my complete surprise, they emailed me back letting me know they were excited to welcome me, and that they would have a few surprises in store.

"At the Amex, they left gifts literally attached to my seats - scarfs for my wife and I, and a plaque commemorating me traveling exactly 4,711 miles from Denver to Brighton.

"I saw several other Albion fans who I’d met online - something I’d never done before - and my wife was worried! But I became good friends with a lifetime fan, Russell, and he introduced me to his group of diehard fans.

"I had the best time with them on match day. I was getting so many DMs from locals to meet up for pints at area bars. All of it was just surreal.

"One of the best things that resulted from my fan-hood is the community we are building here in America.

"There is no official supporters' group here in the States, but we started simply as a grassroots effort under the hashtag #StatesideSeagulls and we all stay in touch on social media.

"Thanks to them, it’s been an amazing three years following the club, and I can’t wait for the day the Stateside Seagulls all travel together for a match in the Amex.”