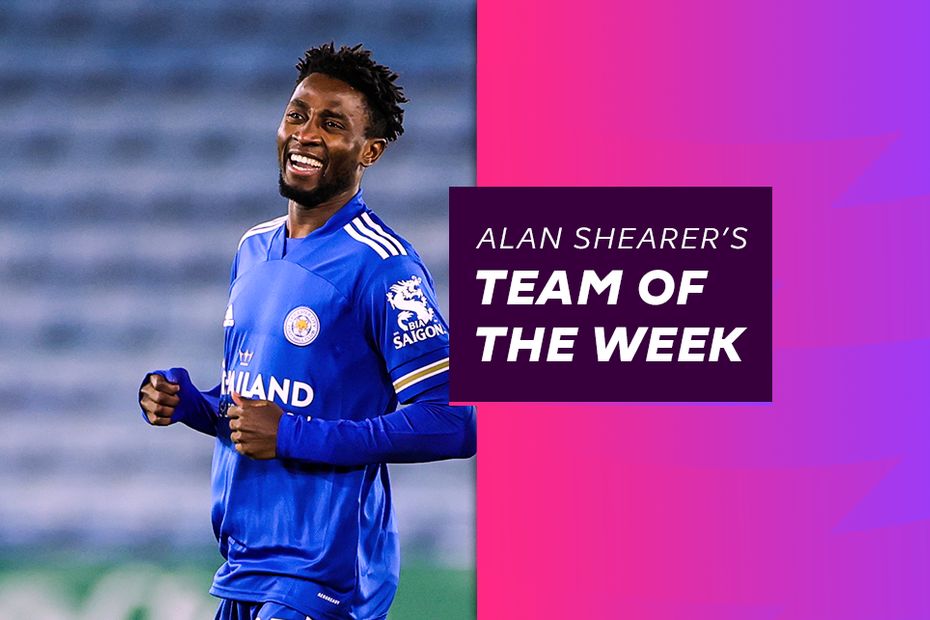 Leicester City stunned champions Liverpool on Saturday, scoring three times in the final 12 minutes of normal time to turn a defeat into a 3-1 victory.

For Alan Shearer, the Premier League's all-time record goalscorer, Wilfred Ndidi was the man who inspired the Foxes' triumph.

The midfielder made 19 ball recoveries, more than any other outfield player in a Premier League match this season, while also setting up Harvey Barnes' goal.

Both players have earned a place in Shearer's Team of the Week.

What do you think of the XI? pic.twitter.com/m1IzuQ1CHx

Emiliano Martinez (AVL) BHA 0-0 AVL
“He was brilliant again, making five or six very good saves. I make no apologies for including him on a weekly basis.”

James Tarkowski (BUR) CRY 0-3 BUR
“He gave nothing away at the heart of the Burnley defence.”

Craig Dawson (WHU) WHU 3-0 SHU
“An unsung hero of this West Ham United team who are fighting for a top-four spot.”

Oleksandr Zinchenko (MCI) MCI 3-0 TOT
“Very good in everything he did, helping Manchester City attack while also protecting his side against Tottenham Hotspur’s attempts to counter.”

Ilkay Gundogan (MCI) MCI 3-0 TOT
“Another spectacular performance, winning the penalty for the all-important opening goal before scoring twice himself.”

Wilfred Ndidi (LEI) LEI 3-1 LIV
“Gave great protection to the defence when Liverpool were on top, and then won the midfield battle when Leicester hit back so impressively.”

Pedro Neto (WOL) SOU 1-2 WOL
“A huge talent who is having a fine season. He changed the game and scored a great goal.”

Josh Maja (FUL) EVE 0-2 FUL
"With both goals on his full debut, he may have just given Fulham a chance of staying up.”

Pierre-Emerick Aubameyang (ARS) ARS 4-2 LEE
“He was magnificent as he scored his first Premier League hat-trick.”

Manager: Sean Dyche (BUR) CRY 0-3 BUR
“He masterminded a brilliant away win. Crystal Palace didn’t know what had hit them as they found themselves 2-0 down inside 10 minutes.”