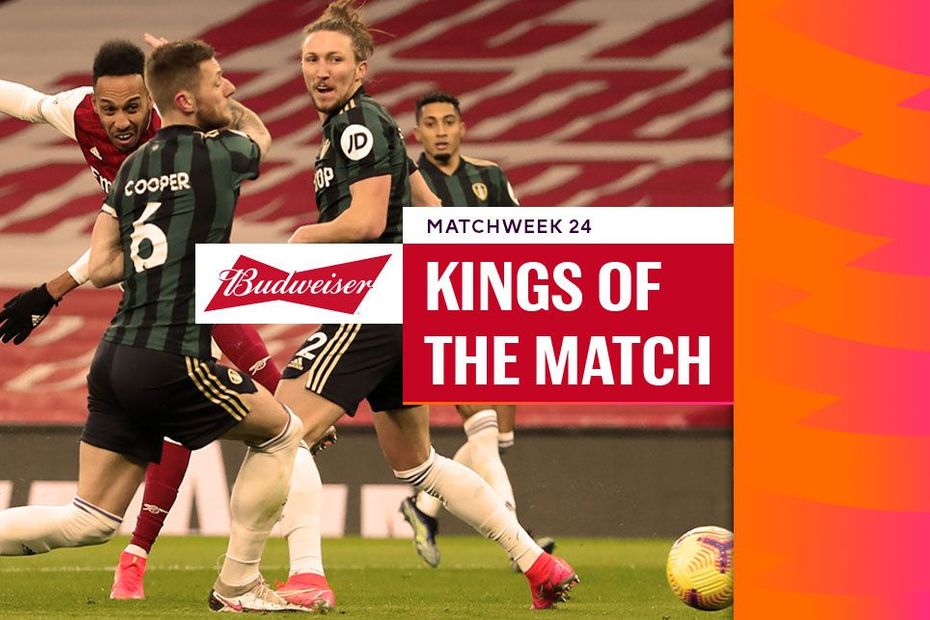 See which players earned the backing of supporters, including Arsenal's Aubameyang

Supporters have voted in their thousands to crown their Budweiser Kings of the Match in Matchweek 24.

The Leicester City playmaker started his side's dramatic comeback by scoring the equaliser with a free-kick.

Burnley's goalkeeper made three saves to keep a clean sheet in an impressive victory at Selhurst Park.

The German scored twice for the second consecutive Premier League match, while also winning a penalty. He was the standout choice among fans, taking over three-quarters of the vote.

Aston Villa's goalkeeper made an incredible nine saves to frustrate Brighton & Hove Albion and keep his 12th clean sheet of the season, polling 77.7 per cent.

The Portuguese produced a stunning strike to score his fifth goal of the season and complete the turnaround, as Wolverhampton Wanderers came from behind to win.

Fernandes took 75.3 per cent of the vote after netting his 14th goal of the campaign with a superb volley at The Hawthorns.

Aubameyang was moved from the left flank to the striker's role and responded by scoring his first Premier League hat-trick, earning 76.6 per cent of the vote.

The 22-year-old became the second-youngest player to score in his first PL start for Fulham, after Collins John in April 2004. Maja went on to score a second goal too, taking 74.2 per cent of the vote.

The West Ham United defender became the sixth player to take over 70 per cent of the vote as he helped his side keep a clean sheet while also setting up a goal.

When Giroud replaced the injured Tammy Abraham early on, he made his 100th PL substitute appearance, and it took him just 11 minutes to put Chelsea ahead with his 21st PL goal off the bench.

The Burnley goalkeeper turned in another solid performance to frustrate Fulham and take more than half the vote.

Another impressive showing from the Manchester City midfielder, who opened the scoring at Everton, helped his side extend their lead at the top of the table to 10 points.