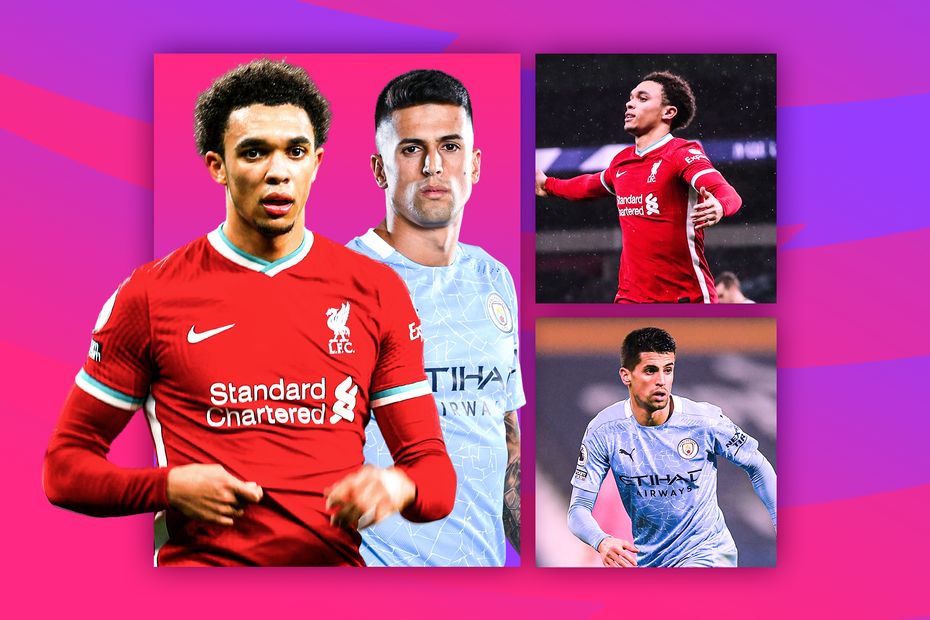 A number of key battles will take place this Sunday when Liverpool host leaders Manchester City.

And from a tactical perspective, both right-backs will be of considerable importance to their respective managers.

Joao Cancelo, who can also play in central midfield, will be vital to Pep Guardiola's tactics.

The influence of Trent Alexander-Arnold inside the final third will also be crucial for Jurgen Klopp's side.

They are two very different full-backs, but each has the ability to impact the outcome of this match.

When it comes to creating chances in open play this term, Cancelo's 30 are second only to the 38 of Kevin De Bruyne.

Cancelo is brave in possession, happy to take opponents on or make an incisive forward pass.

He has delivered 90 passes into the opposition box, the second-highest number, again only topped by De Bruyne, while no other defender has laid on more key passes.

When he moves into central midfield, it will push the likes of Ilkay Gundogan and Bernardo Silva into more advanced areas.

When he stays high and wide, it will allow Raheem Sterling or Riyad Mahrez to take up the "false nine" role.

At times he starts as an orthodox central midfielder, and this is a possibility at Anfield.

Cancelo did this against Arsenal in December and his pressing successfully disrupted them when they tried to play out from the back.

Without Cancelo’s versatility, City would be far easier to play against.

Alexander-Arnold’s form has fluctuated throughout the campaign, but he still poses a threat from the right.

With Liverpool's defence disrupted by injury, Alexander-Arnold has had to be more selective about when to press forward.

However, he has still delivered the most passes into the box, including crosses, and was excellent in wins at Tottenham Hotspur and West Ham United.

A return of just three assists, compared with his 13 last season, will be a source of frustration to Alexander-Arnold.

His crossing accuracy has marginally improved from 15.1 per cent to 15.2 per cent, but Liverpool are not profiting as much from this.

His 18 chances created from open play rank him eighth in the Premier League in this category, while he was second last term, averaging 1.33 per 90 minutes.

Part of the problem has been a downturn in tempo and movement from Liverpool in possession.

When facing low blocks, Klopp’s side has been significantly more laborious than they were en route to becoming champions.

As a consequence, crosses from both full-backs have become easier to defend.

Both Cancelo and Alexander-Arnold are extremely important to their side and it will be fascinating to watch how both players perform in this crucial showdown.