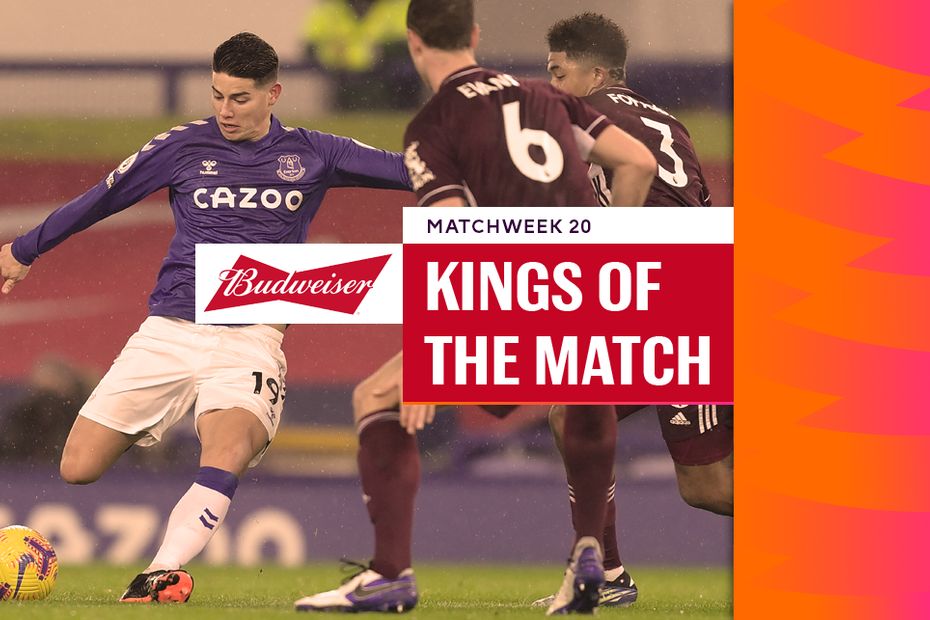 See which players earned the backing of supporters, including Everton's James Rodriguez

Supporters voted in their thousands to crown their Budweiser Kings of the Match in Matchweek 20.

The Brazilian was influential again for Leeds United, scoring one goal and setting up another at St James' Park.

The 19-year-old claimed two-thirds of the vote as his goal and assist helped Arsenal to a fifth win in six matches.

Nominally stationed at right-back, Cancelo roamed all over the midfield and was another player to both score a goal and set up one up as Manchester City earned a seventh straight PL victory.

Aston Villa's captain capped another impressive performance with a goal, but his efforts were not enough to save his side from defeat.

Reunited with Thomas Tuchel after their time together at Paris Saint-Germain, the Brazilian defender produced a composed performance as Chelsea kept a clean sheet in their first match under their new head coach.

The Fulham goalkeeper made a series of saves in a key duel between two relegation rivals, earning almost half of the vote.

The Everton midfielder opened the scoring with a superb strike, taking the award ahead of Leicester City's goalscorer Youri Tielemans.

Manchester United's playmaker created one big chance and provided three key passes but ended up on the losing side.

Scoring one goal and creating another for Roberto Firmino, the Liverpool forward received just under half of the vote.