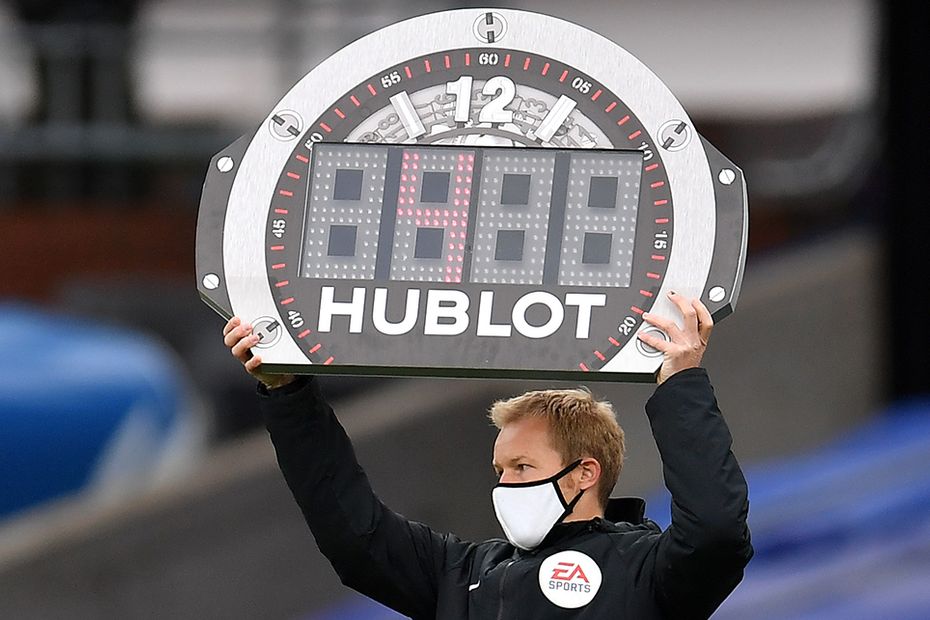 Here we explain how concussion substitutions will work.

Why are additional permanent concussion substitutes being introduced?
Following extensive consultation with medical experts and National Associations to find ways to improve management of possible neurological head injuries in football matches, the IFAB have approved trials to use APCS.

The IFAB, who oversee the Laws of the Game, believe that where there is any doubt about a player having been concussed the players should be protected by being "permanently" removed from the match and to facilitate this, the player’s team should not suffer a numerical disadvantage by prioritising the player’s welfare.

Premier League clubs agreed in principle on 17 December 2020 to take part in the IFAB trial, using two APCSs for each match.

How will these substitutions work?
If the referee stops a match for a potential concussion injury to a player, the medical staff of that player’s team will enter the field of play to make an assessment while the tunnel doctor will review video footage of the incident.

The team doctor will have as much time as is required to make an on-pitch clinical assessment of the player.

If there are clear symptoms of concussion, or the video provides clear evidence of concussion, the team will be permitted to apply to replace the player with an additional permanent concussion substitution.

The substituted player will not be allowed to return to the field of play.

Each team is permitted to use a maximum of two concussion substitutions in a match.

What if these symptoms do not appear?
If there are no clear immediate symptoms of concussion, nor does the video provide clear evidence of concussion, the player will be allowed to continue but will be continually observed during play by his medical staff.

If clear concussion symptoms evolve, he will be replaced through the procedures outlined above.

If no clear symptoms develop and the player continues, he will still undergo a formal clinical assessment at half-time or full-time, depending on when the incident took place.

How does this affect 'normal' substitutions?
Any unused substitute from the initial list of nine named on the club’s team sheet can come on as a concussion substitute.

They can come on even if the team have already used their full allocation of three "normal" substitutions. Up to two APCSs are allowed.

Won’t the team using APCSs and also three normal substitutions have a possible advantage by having more fresh players on the field than their opponents?
No, because once an APCS takes place, the opposing team are given the right to make an additional “normal” substitution at a time of their choosing.

If the opponents are making a "normal" substitution of their own at the time of the APCS, that substitution remains a “normal” one and does not count as “additional”.

What happens if a team have used two APCS but suffer a possible third concussive injury to a player?
The maximum number of APCS available as part of the IFAB trial is two. So either a normal substitution must take place or the player must be withdrawn and the team have to play with a man fewer.

What role do the match officials play in all this?
Firstly, they are not part of the decision-making process as to whether a substitution qualifies as an APCS or not. They will follow the protocols once a team have decided to make an APCS.

They should give appropriate support to a player with suspected concussion and support the medical team in delaying the restart of the match until an appropriate decision is made and the player has been able to leave the field of play.

If the officials believe that an APCS could have been used incorrectly, they must inform the Premier League immediately after the match.

What happens to the replaced player after the match?
As well as any formal clinical assessment of the replaced player, his recovery will be audited by the relevant medical staff to ensure that The FA’s concussion guidelines for an advanced care setting are followed for his return to action.

If the formal post-match medical assessment reveals no concussive injury, then the player is cleared to return to training as directed by the club’s medical team.

Any club who have carried out an APCS must submit to the Premier League, medical information on the player as well as a report of the APCS procedures within seven days of that player returning to training or playing.

How long does the trial last?
The IFAB trial will run in the Premier League until the end of the season but can be extended into the 2021/22 campaign.