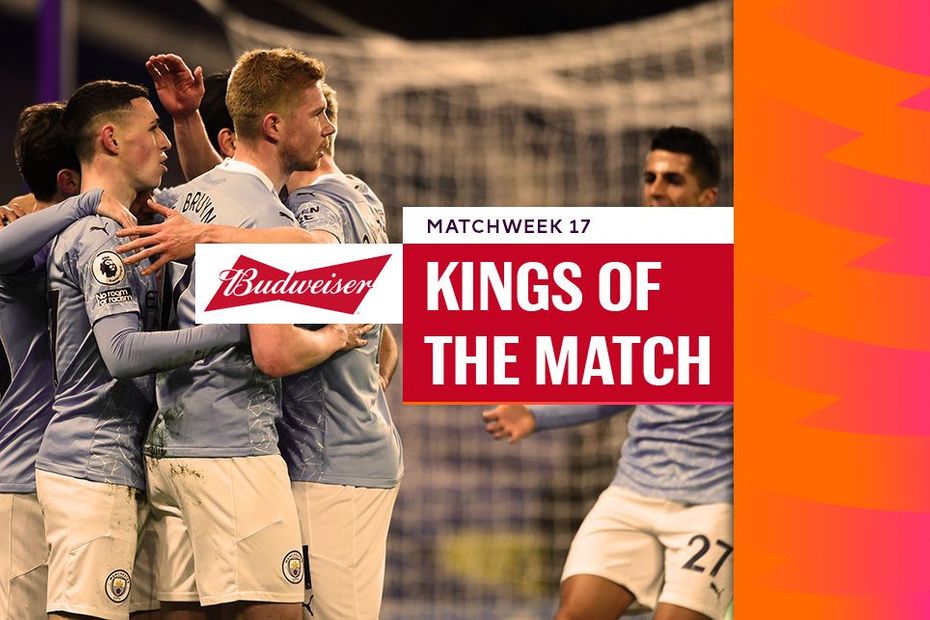 See which players earned the backing of supporters, including Kevin De Bruyne

Budweiser King of the Match explained
What we learned in Matchweek 17
MW17 stats: Saints complete the set against champions

Supporters voted in their thousands to crown their Budweiser Kings of the Match in Matchweek 17.

The Czech midfielder scored his fifth Premier League goal of the season in the 86th minute as West Ham United made a winning start to 2021.

The South Korean scored his 100th goal for Tottenham Hotspur in all competitions while also delivering the corner from which Toby Alderweireld headed in.

Crystal Palace's goalkeeper kept his first clean sheet in 16 Premier League matches, helping the Eagles to their first win in six. He polled 55.6 per cent of the vote.

The Portuguese's creativity was key for Wolverhampton Wanderers in the thrilling 3-3 draw.

Arsenal's left-back scored a fantastic solo goal, crossed for Alexandre Lacazette's second and was solid at the back.

The Leicester City striker was a constant thorn in Newcastle United's side, setting up James Maddison's goal while going close to scoring himself.

Manchester City's talisman was instrumental in a third straight victory, providing the cross for Phil Foden's strike before netting himself.

The right-back dealt admirably with the dual threat of Sadio Mane and Andrew Robertson as Southampton kept a clean sheet to beat the reigning champions.