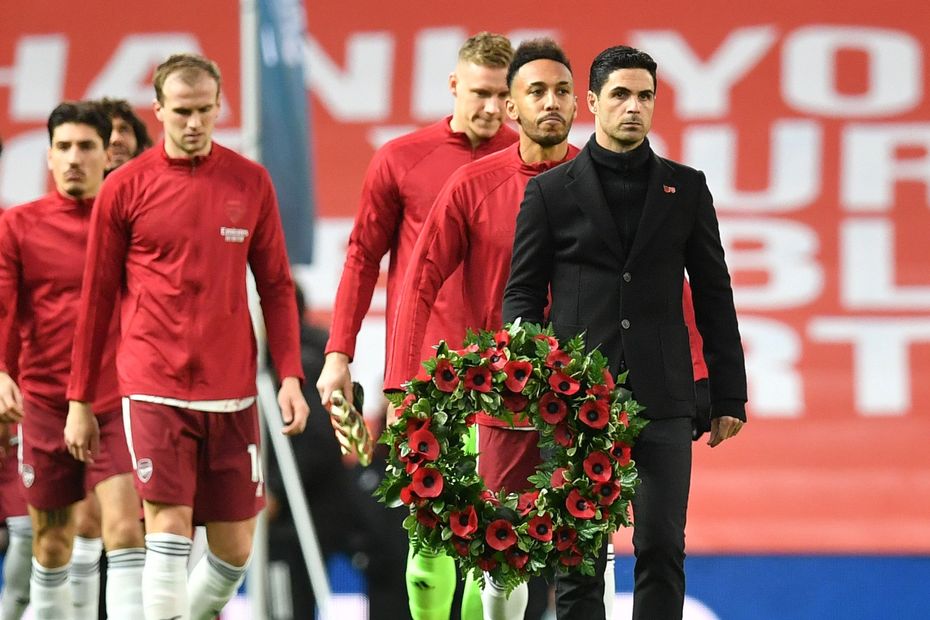 Premier League clubs have been paying tribute to the sacrifices made by the Armed Forces community, past and present, ahead of Remembrance Day, showing their respect in Matchweek 7 and 8's fixtures.

When Everton visited St James' Park, wreaths were displayed in front of a memorial listing the names of Newcastle United players who died during the Second World War.

Poppies were added to the design of the corner flags at Anfield when Liverpool hosted West Ham United.

A bugler performed the Last Post at Bramall Lane ahead of Sheffield United's match against Manchester City.

Luka Milivojevic held a poppy wreath as the players stood around the centre circle before Crystal Palace took on Wolverhampton Wanderers.

Southampton and Aston Villa players joined players throughout the competition by observing a minute's silence at Villa Park.

Like all of the players in the league, Tottenham Hotspur's stars wore special-edition shirts featuring embroidered poppies for their home match against Brighton & Hove Albion.

As in previous years, the match-worn shirts have been signed and made available for purchase in an auction, with all proceeds going to The Royal British Legion.

The Last Post was performed at St Mary's Stadium before Southampton's victory over Newcastle.

Everton's players observed a minute's silence for Armistice Day ahead of their match against Man Utd.

Palace and Leeds United players surrounded a wreath laid in the centre circle at Selhurst Park.

Chelsea captain Thiago Silva laid a wreath as part of the Blues' Remembrance weekend tributes, as they entertained Sheff Utd.

The Last Post was played prior to a minute's silence at The Hawthorns on Remembrance Sunday.

Leicester City manager Brendan Rodgers, right, held a wreath prior to the kick-off against Wolves at King Power Stadium.

Liverpool's players observed a minute's silence at Etihad Stadium, along with their Man City counterparts.

A poppy was displayed on one of the Remembrance Sunday commemorative 'Tommies' that lined the pitch at Emirates Stadium as Arsenal hosted Villa.