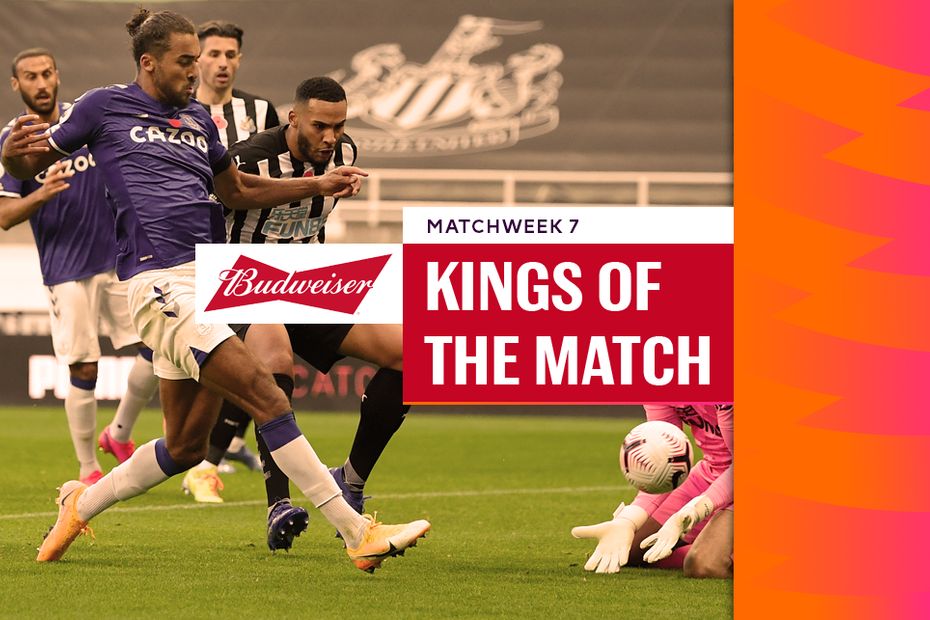 See which players earned the backing of supporters, including Everton's Dominic Calvert-Lewin

Supporters voted in their thousands to crown their Budweiser Kings of the Match in Matchweek 7.

Signed on loan from Angers in France he marked his debut with a fine goal and 33.3 per cent of the vote as he set Wolverhampton Wanderers on the path to victory.

Playing against his former club, he scored the decisive goal to earn 60.7 per cent of the vote as Manchester City secured a 1-0 win at Bramall Lane.

Scoring a goal and creating another for Timo Werner on his first Premier League start earned the Moroccan 59 per cent of the vote.

Liverpool's top scorer moved on to seven goals for the season after netting a penalty in the 2-1 win at Anfield to claim almost 60 per cent of the vote.

The Aston Villa captain spearheaded the hosts' spirited response in defeat, scoring a consolation goal in stoppage time to take just under half of the vote.

The Everton forward edged out Newcastle United's Callum Wilson by only 1.2 per cent after netting his eighth goal of the season at St James' Park.

Earning 42.9 of the vote, the Arsenal forward scored his first goal since the opening day of the season to earn a rare and precious win at Manchester United.

The striker picked up 62.7 per cent of the vote after his penalty sent Tottenham Hotspur on their way to a 2-1 victory over Brighton & Hove Albion.

Two perceptive first-half assists by the Fulham forward proved crucial as the hosts claimed their first three points of 2020/21. He won a landslide 68.5 per cent of the vote.

A constant threat to Leeds United with his pace and intelligent play, he had a hand in three of his side's goals, to take 56.3 per cent of the vote.