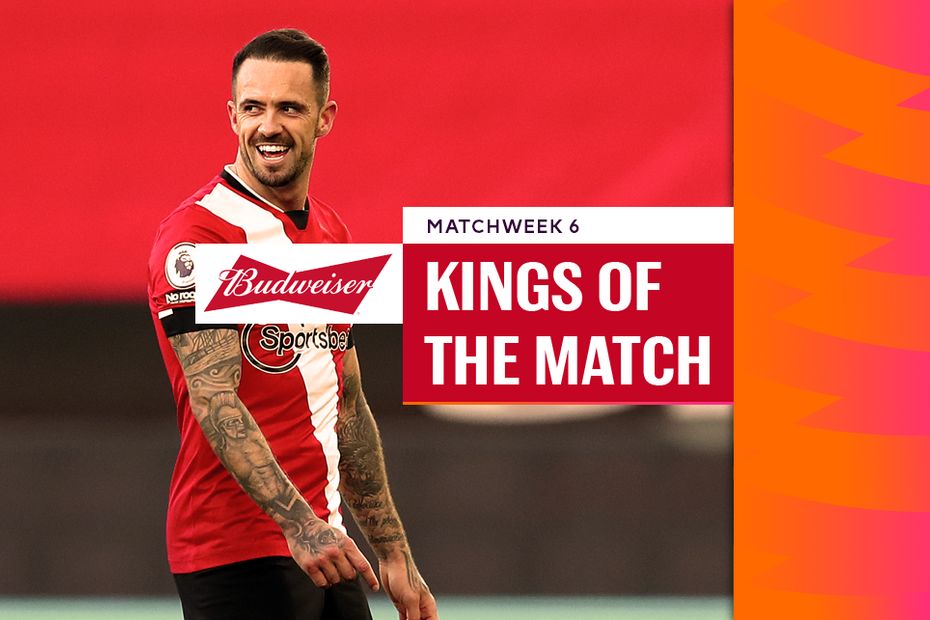 See which players earned the backing of supporters, including Southampton's Danny Ings

Supporters voted in their thousands to crown their Budweiser Kings of the Match in Matchweek 6.

There was little doubt over the identity of the King of the Match following the striker's sensational second-half hat-trick for Leeds United. Bamford won 79 per cent of the vote.

The substitute was pivotal as Manchester City came back to earn a draw, scoring their equaliser six minutes after coming on and beating Michail Antonio in the vote.

He created one goal and scored the other in Crystal Palace's 2-1 win, earning 79.4 per cent of the vote.

The goalkeeper ensured Chelsea left Old Trafford with a point and their first away clean sheet of the season. He made several key saves including one from Marcus Rashford in stoppage time.

Mane edged a tightly-contested vote, with his total of 36.9 per cent enough to beat match-winner Diogo Jota to the prize.

The forward set up both of his side's goals against the leaders, teeing up James Ward-Prowse and then Che Adams. He took 68.5 per cent of the vote.

The forward looked to have claimed three points for his side with his 80th-minute goal, a brilliant right-footed strike from outside the penalty area. He claimed 49 per cent of the vote.

Vardy's header, his 11th goal against Arsenal in the Premier League, earned all three points for the visitors and gained the substitute 54.5 per cent of fans' votes.

The South Korean's classy headed winner was his league-leading eighth goal of the season and helped him take a huge 85.8 per cent of votes.