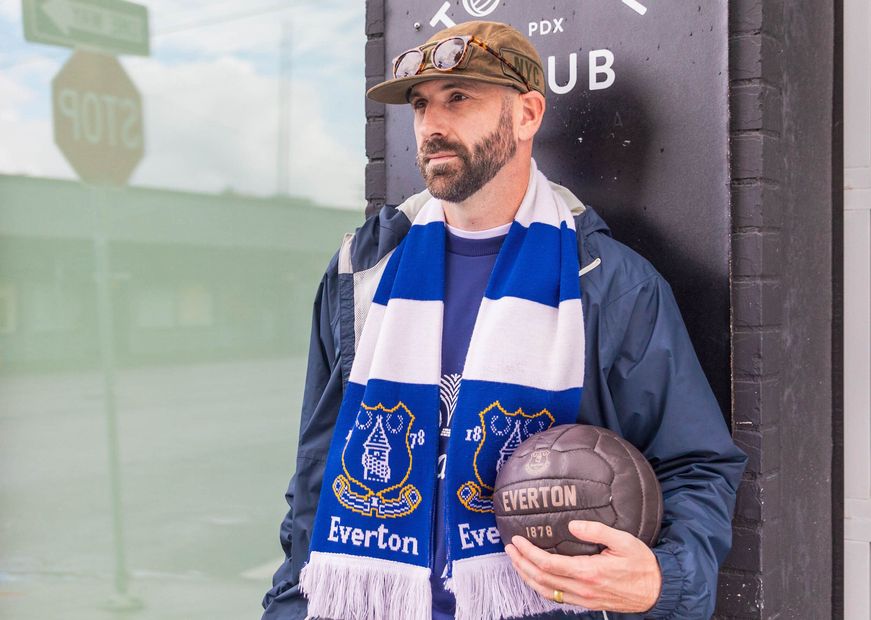 Meet Aaron, a Portlander whose longtime support of Everton helped him turn his passion into his work.

"When I was in high school, there was a weekly Premier League recap show that aired at 2.30am that a friend and I used to watch.

"We had favorite players whose highlights we loved, so we chose our teams according to that criteria. He loved Dennis Bergkamp, but I was a fan of what Andrei Kanchelskis did to Liverpool in an Everton shirt. So in 1995 I was born a Blue and never looked back.

"Over the last 25 years my soccer consumption waned but I fell entirely back in love with the game during the 2014 FIFA World Cup.

"I was working as a social media manager at Twitter and it was quite literally my job to watch every game. I knew then I needed to find a way to make soccer a bigger part of my life.

"Later that summer, I took my dad to the United Kingdom for his 70th birthday. We were able to attend our first PL match - Leicester City against Everton at King Power Stadium.

"It ended in a 2-2 draw, we sat with the Leicester fans who were welcoming and kind, and had such a special experience.

"Fast-forward a few years and now I’m working as a sports marketing manager at Avery Dennison, the supplier of all of the Premier League’s names and numbers that go on the back of the kits.

"We’ve been at the #MyPLMorningsLive events in Miami and Austin, making customised jerseys for fans, and we’re eagerly anticipating seeing all the fans in Philly when it gets rescheduled.

"Our match-up against Liverpool this weekend will certainly be exciting. A real chance for us to make a statement."

"For now I’m working from home in Portland, OR. We shot these images [above] at the The Toffee Club English Pub, the greatest soccer pub in the USA. Please keep your fingers crossed that they’ll be able to reopen once this has all passed. The owners have built a really inclusive soccer community here in Portland, and we wouldn’t have it any other way.

"As for being an Everton fan, this season has been tremendous. And our match-up against Liverpool this weekend will certainly be exciting. A real chance for us to make a statement.

"I remain hopeful, confident even, that this is the year we finally get the better of them."