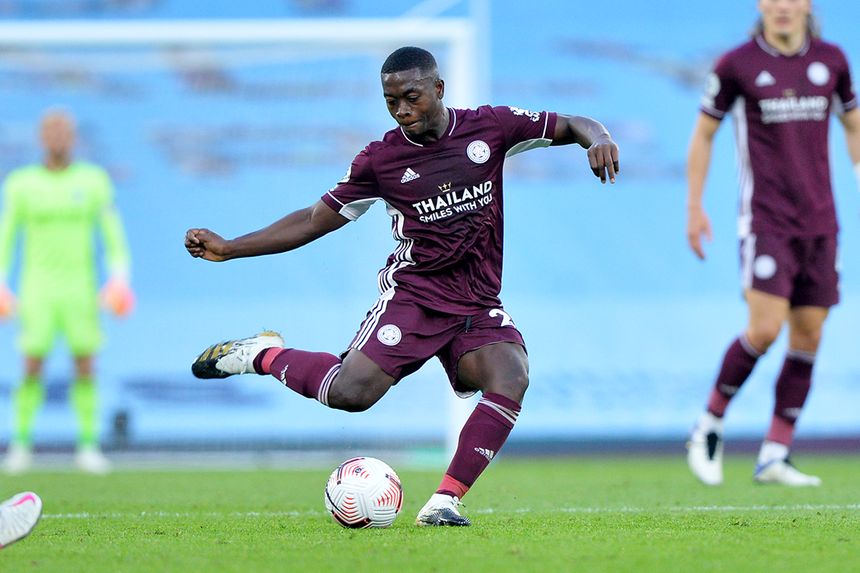 A trip to the Etihad Stadium can be a daunting proposition, and Leicester City's task was made even tougher by the loss of defensive midfielder Wilfred Ndidi to injury ahead of the match.

But they did not miss the Nigerian, thanks to the stellar display of Nampalys Mendy.

Although they fell behind early on, Leicester then showed great resilience to nullify Manchester City's attack and repeatedly hit the hosts on the break, securing a sensational 5-2 win.

Alan Shearer, the Premier League's all-time top goalscorer, was particularly impressed with midfielder Mendy, who he felt was key to the visitors' success.

Shearer has selected the Frenchman in his Premier League Team of the Week, along with Leicester's hat-trick hero Jamie Vardy and manager Brendan Rodgers.

It had to be some performance to keep Illan Meslier out of this team, but Darlow just pipped him after making 11 saves against Tottenham Hotspur. Several of those were top-class.

He was such a threat. He set up Andrew Robertson’s goal and would have had another assist if Bernd Leno hadn’t saved Sadio Mane’s first-half effort. He nearly scored himself too with a long-range strike.

Aston Villa are yet to concede this season, and he is a big reason why. This was another solid performance, with the bonus of a goal at the other end of the pitch.

The left-back played his part in a much-needed clean sheet and provided several great crosses, including the assist for Sebastien Haller’s goal.

Bowen scored two huge goals to ease the pressure on his club. His first strike was particularly impressive, whipping the ball into the bottom-left corner after surging forward.

It is quite a feat to run the midfield against Kevin De Bruyne and co, but he did just that. He disrupted Manchester City’s rhythm and launched counter-attack after counter-attack.

He stopped almost every Crystal Palace attack, doing a particularly great job in tracking back to nullify Wilfried Zaha’s threat on the break. What a signing.

Harrison swung in a perfect cross for Patrick Bamford’s winning header. In fact his crosses were fantastic throughout as he continued his impressive start to his Premier League career.

He clearly wants that Golden Boot again! Two of his goals may have been penalties, but he looks better and quicker than ever, and his second goal was brilliantly taken.

Chelsea gave the West Bromwich Albion attacker two chances and he punished them with a couple of clinical finishes.

He was just too good for Fulham. They simply couldn’t handle him as he made well-timed runs from the left side into the centre at pace.

Rodgers stuck to his gameplan despite conceding early on, and got his rewards with a magnificent counter-attacking performance. Leicester couldn’t win the title again, could they?!