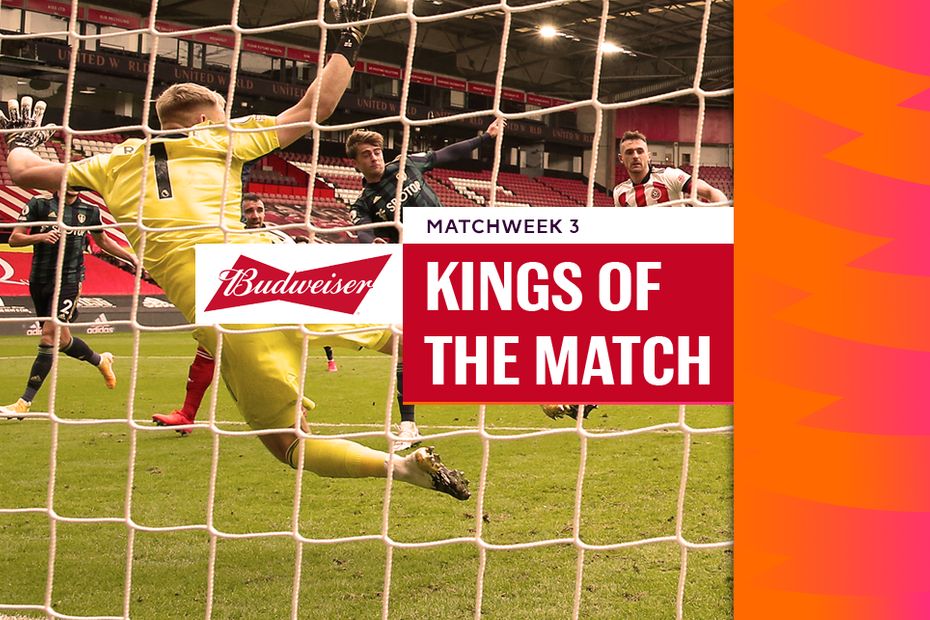 Supporters voted in their thousands to crown their Budweiser Kings of the Match in Matchweek 3.

The Manchester United midfielder took the accolade with almost half of the vote, having set up Marcus Rashford's goal with a glorious through-ball and then kept his composure to convert his late winning penalty.

The Everton striker opened the scoring with his fifth goal in three matches, while his hold-up play also helped him to secure nearly two-thirds of the vote.

Mount started Chelsea's fightback with a fantastic long-range strike, and when his late effort was saved, it gave Tammy Abraham a close-range equaliser.

He claimed 30.4 per cent of the vote, just ahead of Callum Robinson, who scored twice for the hosts to earn 27.3 per cent.

Ings scored the only goal of the match against his former club, receiving over 60 per cent of the vote.

The Leeds United striker scored for a third match in a row, producing the decisive moment late on and securing 70.1 per cent of the vote.

The Newcastle United goalkeeper made 11 saves to keep his side in the match before their late leveller, taking 39.3 per cent of the vote. He edged out Tottenham Hotspur's goalscorer Lucas Moura, who got 31 per cent.

Leicester City's hat-trick hero was the overwhelming choice, earning 81.1 per cent of the vote as he took his total to eight goals in nine matches against Manchester City.

Two goals crowned a virtuoso display by the West Ham United winger, who took over two-thirds of the vote.

His early goal and all-round creativity helped Aston Villa record back-to-back victories, and earned him 56.8 per cent of the vote.

In a typically enterprising display for Liverpool, Alexander-Arnold provided an assist for Andrew Robertson and was unlucky not to score himself as his deflected strike hit the woodwork. He took just over one-third of the vote.