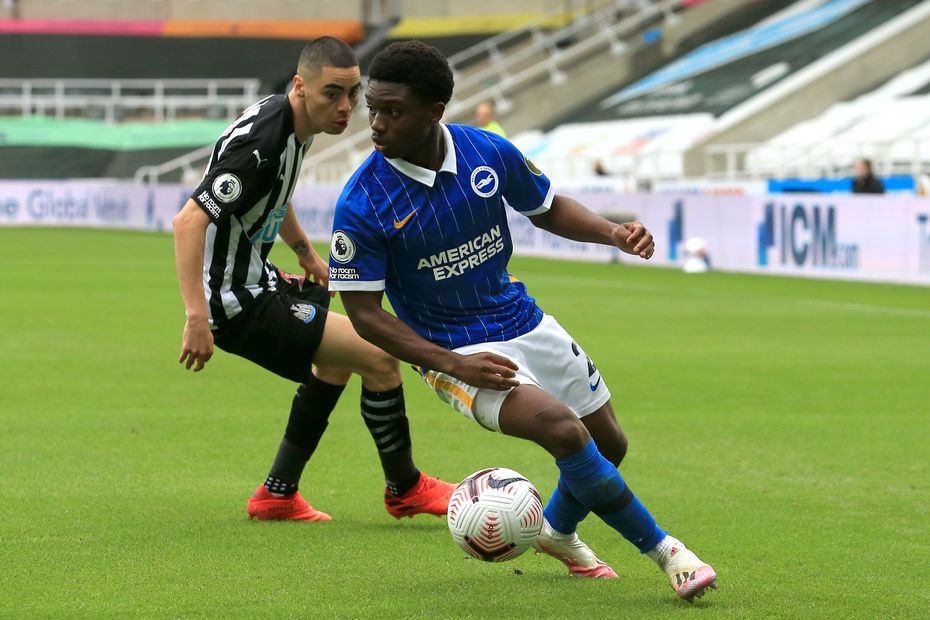 Maupay: No limits to what Tariq can achieve External Link
History made with the highest-scoring Matchweek
Budweiser Kings of the Match: Matchweek 2

For Alan Shearer, the future looks bright in the Premier League after a weekend in which a number of young players shone.

The competition's all-time record goalscorer has selected his Team of the Week, and almost half of the players in his line-up are aged 23 or younger, qualifying for the Hublot Young Player of the Season award.

Brighton & Hove Albion wing-back Tariq Lamptey is the most junior player to get the nod.

The 19-year-old impressed with his pace, skill and attacking enterprise as the Seagulls won 3-0 away against Shearer's beloved Newcastle United.

🚨 @alanshearer's Team of the Week 🚨

👀 What do you think? pic.twitter.com/VSRaM6qyAJ

It was the perfect debut for a goalkeeper as he made a crucial penalty save on his way to keeping a clean sheet.

The teenager only played for an hour but that hour was outstanding. He was a constant threat with his pace and nearly scored a deserved goal. A brilliant future lies ahead.

Old Trafford can be a tough place for visiting defenders but he kept Manchester United’s forwards very quiet in a dominant display.

Newcastle looked dangerous when they beat West Ham United in their opening fixture but they didn't manage a single shot on target as 22-year-old White and the rest of Brighton's rearguard kept them quiet.

Another young defender who has quickly caught the eye. The 21-year-old won his personal battle and frustrated Man Utd's forwards.

Man of the match again. How many times will we say that this season? He both won and scored the penalty that gave his side the lead and looked threatening every time he had the ball.

Manchester City certainly aren't missing David Silva yet! The 20-year-old's movement was hugely impressive as he roamed all over the pitch to get on the ball and made a well-timed run into the box to score.

Ran Man Utd's defence ragged and scored two goals, taking his tally to three in two matches. After not showing his finest form last season, he looks to be getting back to his best.

Showed what a well-rounded striker he is as he scored his first career hat-trick, at the age of 23. He has pace, is strong in the air and has that great habit of being in the right place at the right time.

Won the match for Liverpool with his two goals. His quality and work-rate made the difference when Chelsea went down to 10 men as he headed in brilliantly before putting pressure on a goalkeeper lacking in confidence, and getting his rewards.

Crystal Palace already look like a team that no-one will enjoy facing. After their 1-0 home win over Southampton, this was another masterclass in solid defending and counter-attacking football.