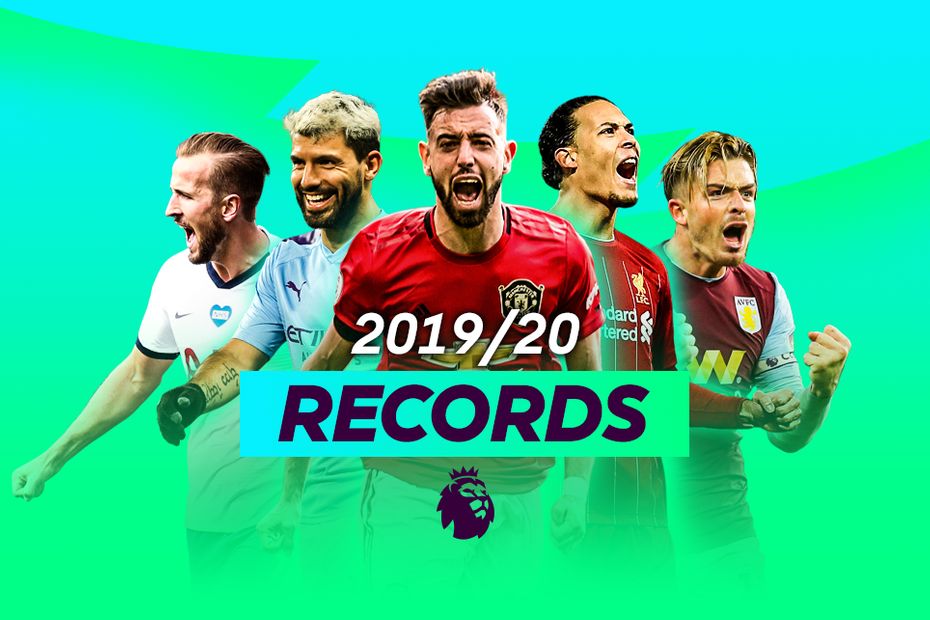 It has truly been an extraordinary Premier League season, with the final matches being played 352 days after the first, and the last two months of the campaign being played behind closed doors.

But the 28th edition of the competition has been historic for other reasons, too.

Liverpool won their first-ever title and a host of Premier League records have been matched or broken by clubs and players.

We take a look at how the competition's history books have been rewritten in 2019/20.

Liverpool set a record of 22 straight victories when they beat AFC Bournemouth at Anfield in March. They went on to extend the run to 24 matches.

Jurgen Klopp's Liverpool won 32 of their fixtures, equalling the record after Manchester City achieved the same total in both 2017/18 and 2018/19.

Most points collected at home

Leicester City’s 9-0 triumph at Southampton was the biggest away win and the joint-biggest victory overall, after Man Utd beat Ipswich Town 9-0 at home in March 1995.

Quickest team to score five in a match

Man City were 5-0 up against Watford after just 18 minutes in September, the earliest a team have managed five goals.

With July’s 3-0 win at Aston Villa, Man Utd became the first team to win four consecutive matches by a margin of three or more goals.

Watford’s 3-0 win against Liverpool was the biggest victory for a side in the relegation zone against the team top of the table.

Wins on every day of the week

Aston Villa became the first side to win on all seven days of the week in a single campaign.

Man Utd were given 14 spot-kicks, the most a team have ever won in a season.

Sheffield United let in just 39 on their return to the competition. The Blades also became the first-ever promoted team to avoid defeat in their first nine away matches of a season.

Norwich City were relegated for a record fifth time, scoring the fewest-ever away goals in a season, with seven. They also lost all 27 matches in which they fell behind, becoming the only team not to record a single point from a losing position.

West Bromwich Albion were promoted from the Championship for a record fifth time.

De Bruyne equalled Thierry Henry’s record of 20 goals set up from 2002/03. De Bruyne also became the first player to set up at least 15 goals in three different campaigns, and the fastest to reach 50 assists, doing so in 123 matches.

Most goal involvements in first 10 matches

Bruno Fernandes registered his 13th goal involvement in his 10th match, the joint-highest total for goals and assists in a player’s first 10 appearances.

Jamie Vardy finished as the top scorer at the age of 33, with 23 goals. The previous oldest Golden Boot winner was 32-year-old Didier Drogba, who scored 29 times in 2009/10.

Sergio Aguero become the top-scoring overseas player when he overtook Thierry Henry's total of 175 with three goals at Aston Villa in January. He finished the campaign with 180 goals.

Most hat-tricks in history

With his 12th hat-trick in the competition, netted against Aston Villa, Sergio Aguero broke Alan Shearer's record of 11.

First player to score in his side’s first six matches

Sergio Aguero achieved the feat when he found the net in an 8-0 victory over Watford.

Most goals in first two matches

With a goal against Liverpool and a hat-trick against Newcastle United, Teemu Pukki became the first player to score as many as four goals in his first two appearances.

Scoring against every team faced

A goal against Sheff Utd in July meant that Harry Kane scored against all 29 opponents he has faced. He is the only player to face more than one club and score against them all.

Most fouls on a player

Most chances created in a month

Emiliano Buendia created 29 goalscoring chances in December, the most by a player in a single calendar month since such data became available in 2003/04.

Scott McTominay picked up a yellow card after just 24 seconds in Man Utd’s Boxing Day match against Newcastle, the fastest given since this data started being collected in 2006/07.

David Luiz gave away five, the most by one player in a season.

Most Player of the Month awards

Most Manager of the Month awards in a season