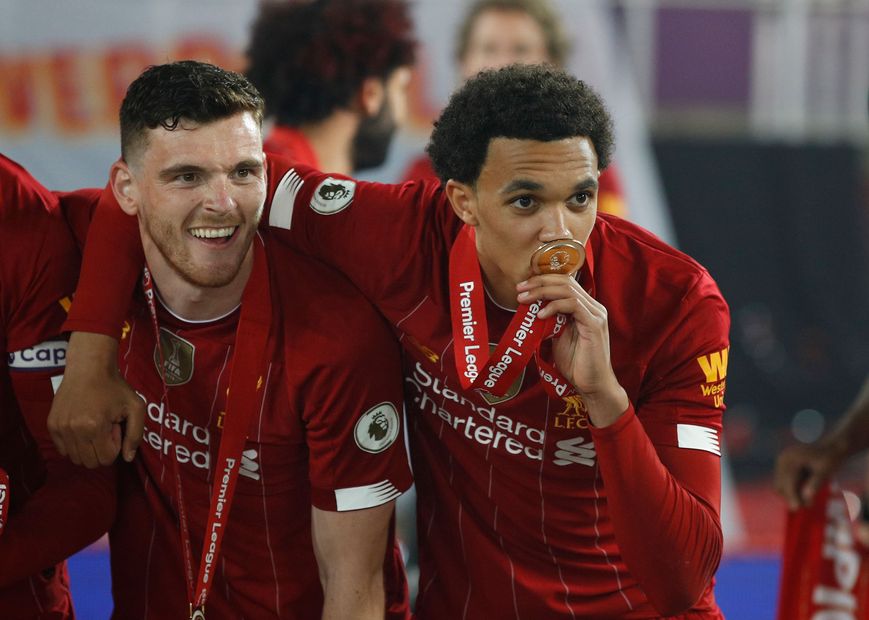 Fowler: I'm so happy to see club I love lift the Trophy!
Klopp: We won this Trophy for the fans

After helping Liverpool end their 30-year wait to lift the league title Trent Alexander-Arnold says he knows more than most the joy at finally being crowned Premier League champions.

Alexander-Arnold delivered a goal and an assist in the 5-3 victory over Chelsea, before lifting the Premier League Trophy on a special stage on the Kop.

And having grown up opposite Liverpool’s training ground and joined the club as a six-year old, Alexander-Arnold felt at one with the Reds' fans in the joy at seeing them end their wait to be champions, especially after coming so close last season.

"This is the one that everyone wanted," he said. "Last year was a disappointment not being able to win it, but this year’s been so special for us.

"I know probably more than the rest of the lads in terms of how much the fans really wanted this.”

Inside the dressing room celebrations with the Reds 👌 #LFCchampions pic.twitter.com/mv4rl3SK5E

Although, at the age of 21, he has won the UEFA Champions, UEFA Super Cup and the FIFA Club World Cup, Alexander-Arnold revealed it is the coveted Premier League Trophy that means the most.

"I'd trade all my trophies in just for this one," he said. "And to be able to finally get this medal around my neck is a special feeling especially after 30 years of waiting for it.

"We’ve come close so many times and not been able to get across the line. I think now it’s so special to be part of such a special club and I’m grateful for every opportunity I’ve been given.”

Alexander-Arnold added it was poignant that Jurgen Klopp's side should celebrate their long-awaited title victory after reaching a points total that mirrors the number of fans who sadly lost their lives in the Hillsborough tragedy in 1989.

"It’s a special touch for us to be able to lift the Trophy on 96 points, which is a special mark for the club," he said.

"It’s a special evening and it’s disappointing that the fans aren’t here but hopefully all the fans will celebrate it.

"They're here in spirit and we can feel the whole club and the fans with us tonight."