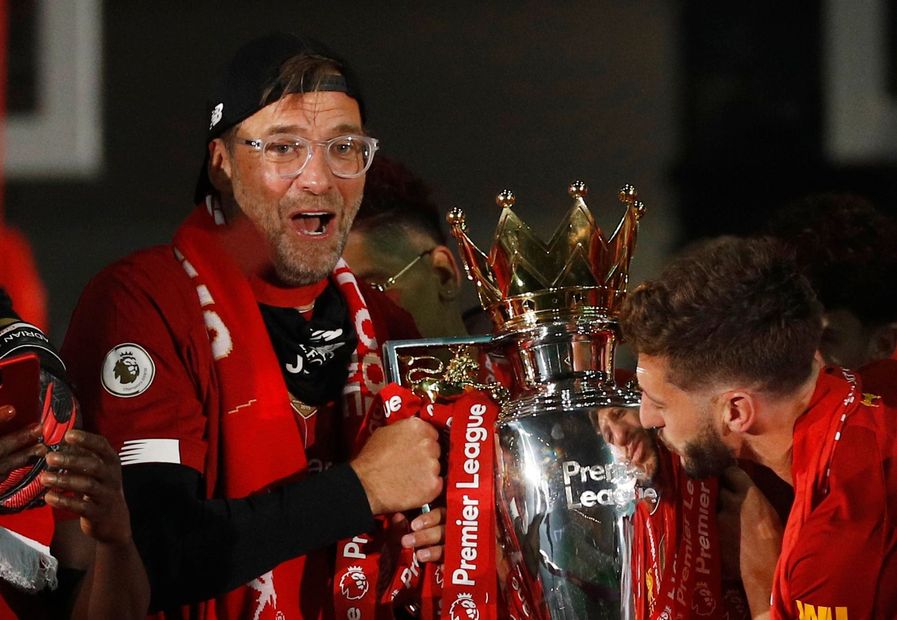 After lifting the Premier League Trophy at Anfield on Wednesday night, Liverpool manager Jurgen Klopp dedicated the club's triumph to their fans.

Liverpool saw off Chelsea 5-3 in a highly entertaining and open encounter, the champions' final home match of 2019/20 held behind closed doors because of the impact of COVID-19.

After lifting the Trophy on the Kop, the first German manager to win the Premier League immediately focused on the club's fans.

"What we tried to make clear for the people is that we really do it for them," Klopp said. "We celebrate here alone but we know that at the moment, everyone [the Liverpool fans] is celebrating at home. It's a great moment, absolutely great moment."

Jordan Henderson added that the team ethic instilled by Klopp since the club appointed him in 2015 had been integral to their success.

"That's the most important thing, the team," the Liverpool captain said. "It's a really close group, on the field and off the field, and that makes a massive difference. That is something the gaffer's brought … and that's made a really big difference on the pitch."

Henderson added Liverpool will find it hard to defend their title successfully in 2020/21.

"The Premier League has been a dream of mine since I was a kid," he said. "We'll enjoy tonight but after this, next season it going to be a big challenge for us."

Even if he could not become the first Liverpool captain to lift the Trophy in front of the club's fans, Henderson still enjoyed the ceremony on a podium on the Kop and that the players' close relatives were able to witness it.

"We've been waiting for it a long time, but the build-up to it, walking up there, was amazing," he said. "Thankfully, the families were up there watching, which was a big thing for us as a team.

"It's been an amazing season, to crown it off like that was really special."