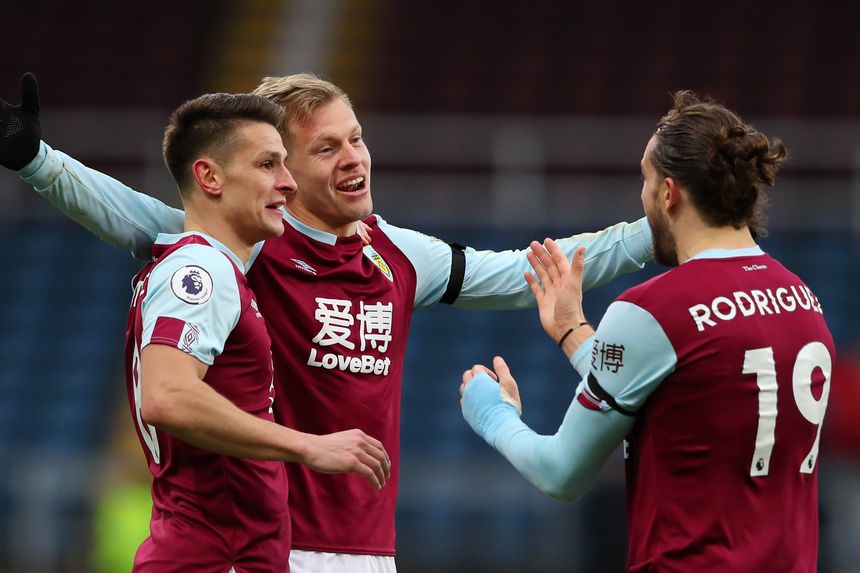 During a run that stretches back to January 2018, Burnley have scored only one goal across four defeats to Hodgson’s Eagles.

If the Clarets are to end this hoodoo at Selhurst Park on Monday night, they must do so with their back-up forward line, fitness permitting.

A different line of attack

Matej Vydra and Jay Rodriguez offer Burnley an alternative route to goal in style compared with that of the injured Chris Wood and Ashley Barnes.

Rather than dominating their markers with aerial power and physicality, Vydra and Rodriguez rely on sharpness, skill and clever movement.

In five of Burnley's last six outings, Vydra and Rodriguez have been the principle front two, with the only loss in that period coming at Manchester City.

Each striker has scored twice so the Clarets seem to have modified their approach pretty successfully.

In fact, over the course of the campaign, Burnley have shown a greater goal threat when Vydra and Rodriguez are playing.

While the pair have been on the pitch, the team have scored a goal every 59 minutes, a huge improvement on the season average of 79.7 minutes.

Vydra and Rodriguez's movement caused Watford problems during the first half of their 1-0 victory on Thursday.

Making a series of runs into the channel in behind a relatively high line, they helped Burnley turn defence into attack very quickly.

Palace tend to defend fairly deep but if Vydra and Rodriguez's combined runs are dynamic and clever enough, this pair can cause Eagles centre-backs Gary Cahill and Mamadou Sakho just as many issues.

Of course this two-pronged attack may be blunted before it can get going on Monday night if "J-Rod" fails to recovers in time from the foot injury he picked up at Vicarage Road.

Home and away Burnley set up to be hard to break down, and the stats from this season prove they are right to be cautious from the outset.

When they do concede the opening goal, Dyche’s men have a poor record chasing matches, collecting only five points from that position.

They have been 1-0 up in 14 matches this season and converted these scores into 11 victories, losing only once.

To break their poor run against Palace, you feel it is imperative they score first.