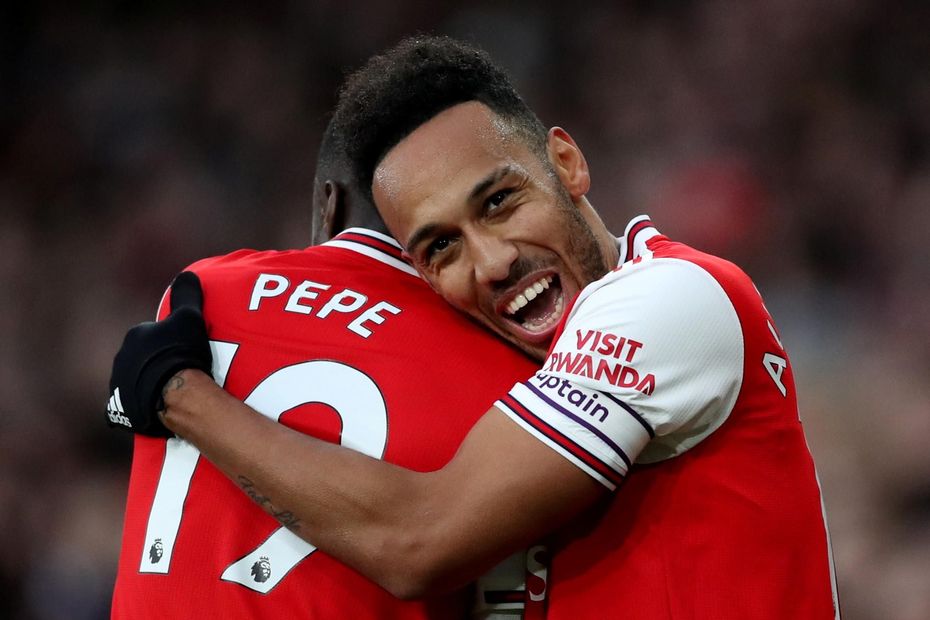 Auba takes on Pepe | What Do You Know? External Link
Alan Shearer's team of the season so far: Forwards
Coronavirus: Clubs support in the community

It is unusual for opposite wide men to strike up a successful partnership, but that is the case at Arsenal.

As inverted wingers who both like to drive inside on to their stronger foot, Pierre-Emerick Aubameyang and club-record signing Nicolas Pepe have become the Gunners’ most effective duo.

On the same wavelength

These two attackers do not play in close proximity to one another on the pitch and only share on average 3.4 passes per match.

But the quality of their link-up play is extremely difficult for defenders to handle.

An impressive 17 of 53 successful passes between them, or 32 per cent, have ended with a scoring opportunity for one of them.

This makes them the most efficient duo in the Premier League for chances created, ahead of Manchester City's Kevin De Bruyne and Sergio Aguero.

In 17 Premier League starts for the Gunners, Pepe has produced four goals and six assists.

While he is inconsistent, he can provide flashes of outrageous skill and inspiration for his team.

The Ivory Coast international's rapport with Aubameyang is full of promise.

He has three assists for his captain and has created 10 chances for him overall..

Most chances created for Aubameyang

This creativity means that Aubameyang knows to gamble with runs into the box.

As soon as Pepe shapes to play an inswinging cross or a slide-rule pass from the right, Aubameyang joins in as a second centre-forward inside the penalty area.

Reading those deliveries earlier than his markers, he scored excellent headed goals at home to Newcastle United and Everton.

Prior to that, Aubameyang had volleyed home a delightful chip pass from Pepe in December's 3-1 win at West Ham United.

No one in Mikel Arteta’s squad has supplied as many chances or goals for the skipper as the 24-year-old.

Head coach Arteta will be delighted their relationship is not one-way.

Inside the final third, Arsenal’s captain mirrors the connection by looking out for Pepe popping up in goalscoring positions.

Most chances created by Aubameyang

The number of times these two have picked out one another out with crosses or clever angled passes has proved exceptional.

But to maintain and better this, Pepe will need to produce more open-play crosses on a consistent basis.

He has a wonderful left foot, but six team-mates have delivered more balls into the box per 90 minutes than his average of 2.31.

If Pepe can raise that figure then Aubameyang’s pursuit of retaining the Golden Boot will be handed a major boost.