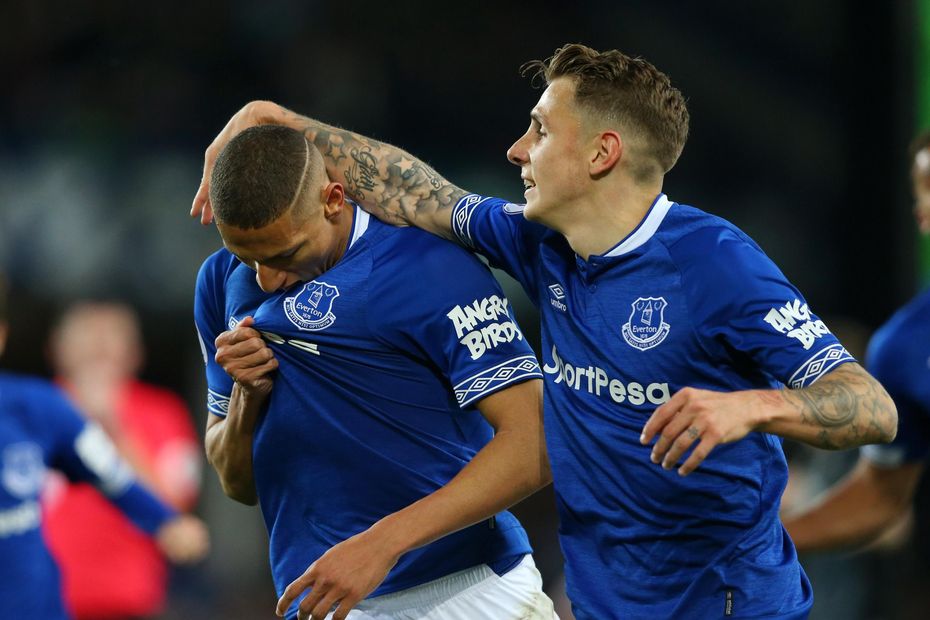 Adrian Clarke looks at the relationship between the Everton pair, which has given the Toffees a significant aerial threat

Richarlison's primary aim for when he's back playing External Link
Coronavirus: Clubs support in the community

The partnership that is developing between Richarlison and Lucas Digne has been a major highlight for Everton.

With the accuracy of Digne's deliveries and the aerial strength of Richarlison, they are one of the most effective full-back and forward combinations in the Premier League.

From open play, left-back Digne has produced an impressive 115 crosses this season.

Among full-backs his return is bettered only by Liverpool duo Trent Alexander-Arnold and Andrew Robertson, who have managed 195 and 131 respectively.

The Frenchman regularly takes set-pieces and his precision leaves him fourth-highest for the number of successful crosses overall.

Richarlison is outstanding in the air and attacks crosses with supreme confidence.

No player in the competition has registered more headed efforts on goal this season.

The Brazilian forward has a knack of knowing exactly where Digne will put the ball, and he times his runs to perfection.

The stats reflect just how effective this combinations is.

Only two pairs in the Premier League have executed a higher number of successful crosses from one player to the other, and they are largely leading because of set-pieces.

While Richarlison gets chances from Digne's corners and wide free-kicks too, set-pieces only represent half of the opportunities laid on for him by the defender.

Eight of the key passes from Digne to Richarlison have stemmed from open play and, of the 16 supplied in total, 13 have been from crosses.

Richarlison is without question the Everton player opponents must worry about most.

While Calvert-Lewin has been in terrific form this term, he does not have the same chemistry with his left-back. In fact, he has received only six key passes from the Frenchman.

It is perhaps a surprise that Digne has provided only two assists for Richarlison in 2019/20, but if they continue to work so well together that tally is sure to improve.

This is a partnership manager Carlo Ancelotti will particularly look forward to seeing blossom over time.