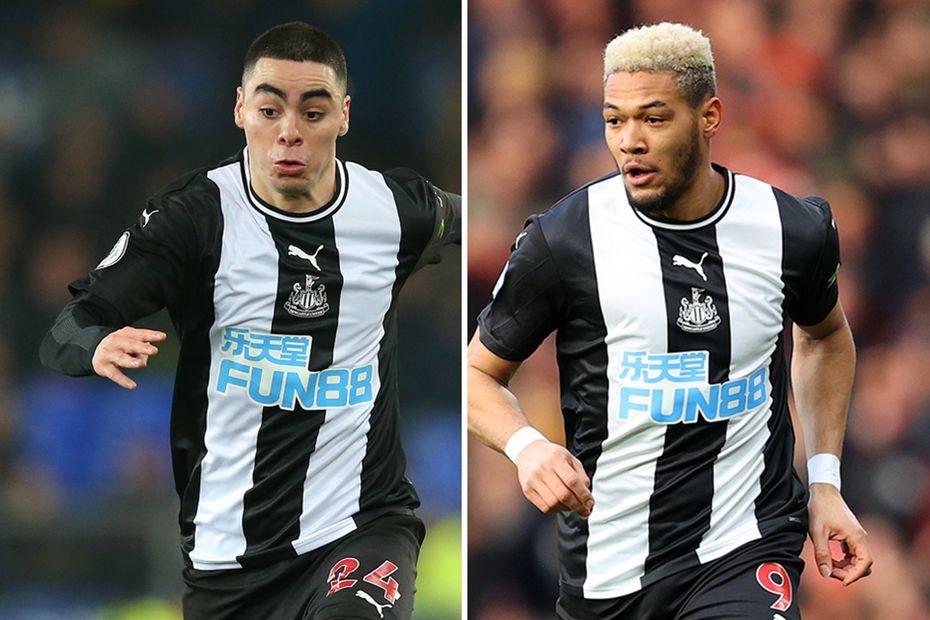 Adrian Clarke looks at some of the standout partnerships of the 2019/20 Premier League season so far.

Because he leads the line for a side who play the second-fewest number of short passes in the Premier League, Joelinton has to control a lot of longer balls.

But he does so well and it helps create space for his team-mates.

The Brazilian may have scored only once in 27 starts of his debut PL campaign, but the target-man role is one he performs very well.

Strong at holding the ball up, the 23-year-old boasts a pass accuracy of 77 per cent, a very respectable figure for a centre-forward.

This is why head coach Steve Bruce has shown so much faith in him.

The most prolific pass combination at St James’ Park has been the long kicks of goalkeeper Martin Dubravka to Joelinton.

There have been 140 successful back-to-front passes of this nature, which indicates just how direct their style has been.

Newcastle’s second-most frequent link-up is between Joelinton and Miguel Almiron.

Once the striker has controlled a direct pass, he regularly brings the gifted Paraguayan into play.

From there Almiron is able to weave his magic in attacking areas.

And it helps Bruce's side gain possession inside the opposition half.

Early on in the campaign Almiron struggled to get close enough to the lone front man.

Operating wide in a 5-4-1 formation, it was difficult to offer the type of support runs Joelinton requires. But it is something they have since worked hard to improve.

Bruce’s use of Almiron in a more central attacking-midfield position in recent months has also aided the chemistry between the pair.

Joelinton and Almiron have combined for 154 passes over the course of the campaign, the most of any team-mates at Newcastle.

In turn, this has helped Almiron influence matches on a more consistent basis.

The duo have also operated as a front pairing of sorts and switched roles, with Joelinton moving to the left.

In a team who focus on efficiency with the ball rather than sustained possession, it will delight Bruce that his two principal attackers are collaborating so effectively.

The unselfish Joelinton has now created seven goalscoring opportunities for Almiron, who has scored twice in 2019/20 and looks a more confident player now he is off the mark for the club.

This pairing is not one of the division’s most productive in terms of goals or assists, but for Newcastle the foundations of a promising partnership have been laid.