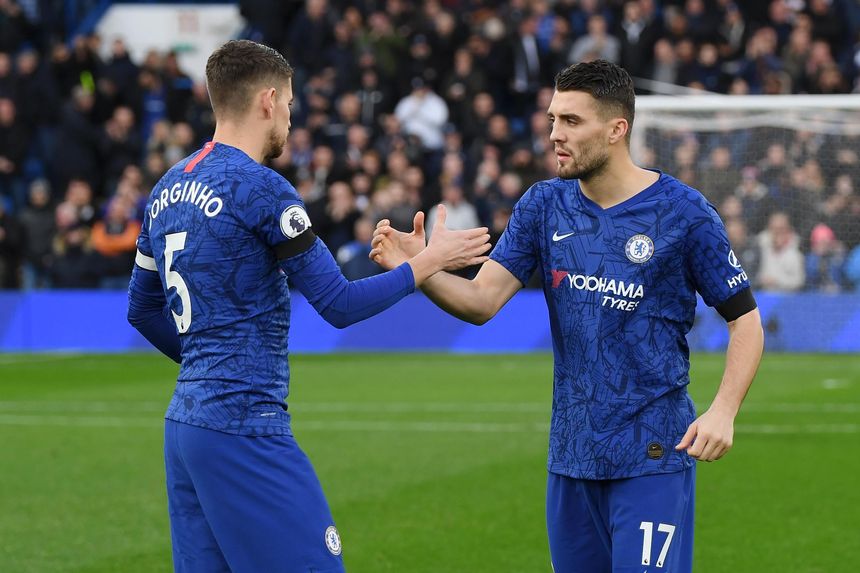 Not all great partnerships instantly catch the eye and that is the case with Chelsea’s midfield duo of Jorginho and Mateo Kovacic.

Well suited to the possession-based style of their head coach, Frank Lampard, they have struck up an understated but special rapport.

Jorginho and Kovacic share more passes than any midfield pairing in the Premier League.

Most combined passes between midfielders

The vast majority of their passes to one another are short.

In February's 2-1 win over Tottenham Hotspur, the last time they started a home match together, Jorginho and Kovacic found each other 46 times.

All of those passes were 12 yards or under in length and this is typical of their connection.

Chance creation is not the basis of this partnership.

Instead, they focus on keeping possession ticking over for the Blues. Only Manchester City and Liverpool make more successful passes inside the opposition half.

Jorginho and Kovacic pass and move with such confidence that opposing midfield players often get tired or dragged out of position chasing the ball.

Most successful passes in opposing half

Jorginho, 28, is known for his metronomic passing from the base of midfield, while partner Kovacic has more strands to his play.

The 26-year-old Croat can operate centrally or out wide and is able to perform as an attacking midfielder.

After receiving passes from Jorginho, Kovacic regularly breaks the lines with the ball at his feet.

When it comes to dribbling past opponents, he is the best central midfielder in the division.

Making 68 successful take-ons, he opens up attacking situations in a way very few in his position can replicate.

Most dribbles completed by midfielders

While it has been an injury-disrupted campaign for Chelsea’s most renowned midfielder, N'Golo Kante, the partnership between Kovacic and Jorginho has blossomed extremely well.

Together this  pairing help to create a clear identity for the Lampard era at Stamford Bridge.