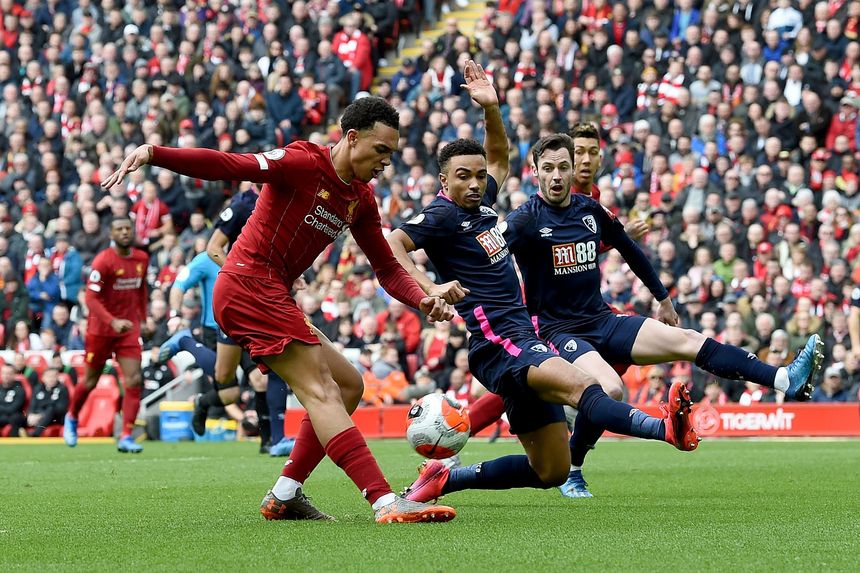 'I'm so proud to be the Scouser in the team'' External Link
Alan Shearer's team of the season so far: Defenders
Owen: Alexander-Arnold is world-class

A full-back, winger and midfield playmaker all rolled into one. Alexander-Arnold has world-class credentials.

At the age of just 21, the England right-back has been sensational for Liverpool all season.

The homegrown player is an integral part of a formidable right-sided trio, working in close proximity with Jordan Henderson and Mohamed Salah.

His constant supply of quality passes and crosses throughout 2019/20 have established him as an invaluable member of Jurgen Klopp's side.

The defender changes the direction of his side's attack in a way very few players can.

He switches the ball quickly from the right to the left with unerring precision and his long passing has developed incredibly over the last 12 months.

Alexander-Arnold's cross-pitch deliveries, which stretch the opposition, are now a major tool in Liverpool’s attacking armoury.

Confident in his technique, Alexander-Arnold has attempted 50 more long passes than any team-mate this term.

Manchester City's Kyle Walker is the only other full-back to play the ball over long distances anywhere near as well.

Alexander-Arnold's attacking prowess attracts far more praise than his defensive skills, but that does him an injustice.

No other Liverpool player can match his 36 interceptions, while he ranks second for most blocks, for clearances and for tackles won.

But his greatest strengths are on display inside the opposition half.

Alexander-Arnold's 321 passes into the final third are the most by any Premier League player this season.

Releasing Liverpool's front three with an early forward pass is always his first port of call.

Once he has advanced into the final third, the delivery from his right boot is the envy of many wingers.

He has created 40 chances from open play, the seventh-best tally in the division, and his 36 shots are the most of any defender, with two goals as a result.

Most passes into box (inc. crosses)

Alexander-Arnold's ability to whip crosses into the penalty area with such regular efficiency and accuracy is ideal for the runs of Sadio Mane, Roberto Firmino and Salah.

He has delivered a staggering 119 more passes into the box than any other top-flight player, with Kevin De Bruyne his closest contender.

Alexander-Arnold's set-piece brilliance also shines brightly. Seven of his 12 assists this season have come from corners or free-kicks.

De Bruyne is the only player to have created more opportunities from dead balls.

The full-back's ability to fizz deliveries into the right areas with devastating pace is so good he has almost exclusively taken over the Reds' set-piece duties.

Statistically, Alexander-Arnold's exploits this season are off the scale.

With such a variety to his play, he is arguably the leaders' most important player and, with scope to further develop, this exciting right-back's potential is frightening.