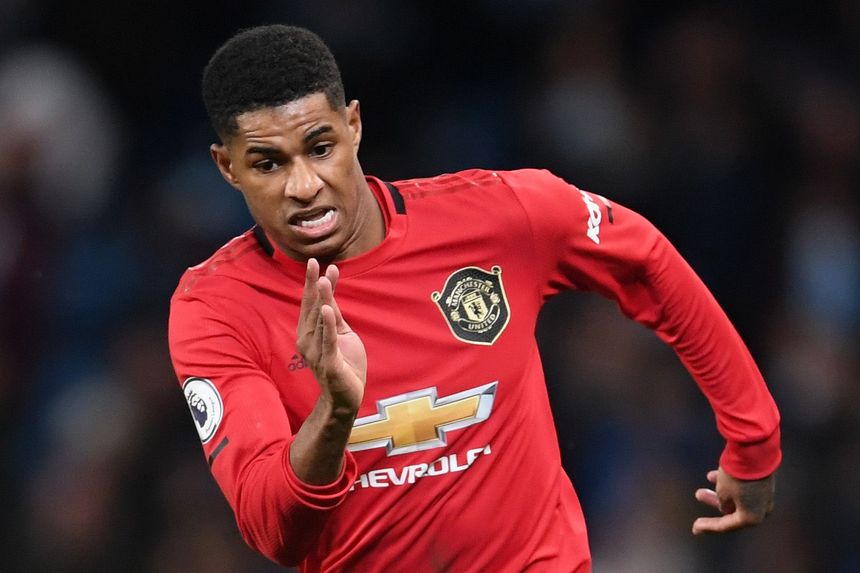 Solskjaer: Footballers have a part to play in this External Link
Alan Shearer's team of the season so far: Goalkeeper
PL Uncut: Rashford boost for FIFA 20 Ultimate Team celebrations

Rashford has been tailor-made for Manchester United's style of counter-attacking football in 2019/20.

He has scored 14 goals and been comfortable playing in any position across Ole Gunnar Solskjaer's fluid and pacy front line.

Before sustaining a back injury in January Rashford was performing more confidently and expressive than ever before.

Whether starting as a striker or on the left wing, the 22-year-old's intelligent runs in behind defenders are a constant concern.

Rashford is especially lethal from turnovers and breakaways when he can stride into space.

This aspect of his game was highlighted against Chelsea and Norwich City when he controlled long passes clipped over the top and produced clinical 1v1s finishes.

The Academy graduate also capitalised with sprints into the box to slot home crosses against Liverpool and Burnley.

Winger Daniel James provided three of those assists and has laid on four goals in total for his fellow forward.

Using the duo's combined pace to good advantage, their understanding is paying dividends for the team.

Rashford's sharpness and trickery has skilfully drawn fouls at key moments for United.

Indeed four of the five penalties he has scored were a direct result of challenges on him.

Only Riyad Mahrez of Manchester City can match his total of four spot-kicks won this term.

How Rashford has scored his goals

A key feature of Solskjaer's first full season in charge is a penchant for tactical tweaks in the biggest matches.

His occasional use of split strikers is his most eye-catching ploy and could be a shape we see more often.

And in Rashford, James, Anthony Martial and Mason Greenwood the Norwegian has a quartet of forwards who are similar in style and capable of transitioning comfortably between wide and central positions.

It is increasingly difficult for rival managers to predict Man Utd's approach and where Rashford, in particular, will start.

The collective flexibility of these four forwards gives Solskjaer a valuable pre-match edge.

All of Man Utd's front players can be unleashed in various ways but the leader of their group is Rashford.

The England striher has blossomed into a fine all-round player and produced 41 goals in 133 Premier League appearances.

And there promises to be more to come, with Rashford yet to feature alongside new signing Bruno Fernandes.

When those two talents link up they have the potential to be a deadly double act.