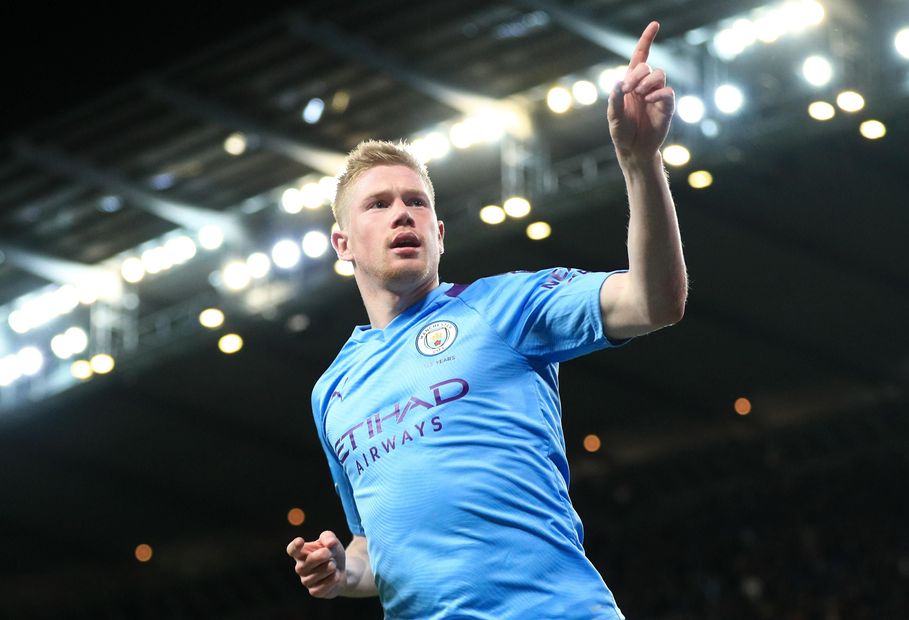 Walker: We are all keeping each other's spirits up External Link
Coronavirus: Clubs support in the community

Creativity and hard work do not always go hand in hand but they are two of the reasons why De Bruyne has regained his status as Manchester City’s most important player.

Free from the injuries that marred his previous campaign, the Belgian has this season coupled his natural skill with the type of fierce application Pep Guardiola demands.

In an outstanding campaign he has contributed 24 direct goal involvements.

Operating anywhere across City's midfield, but perhaps most effectively on the right of a three, De Bruyne is a proven master at laying on goals.

In fact he is probably the best in the world at delivering whipped crosses from outside the box on the right.

This trademark ball has been a key feature for his side all season.

Below is a breakdown of his 16 assists this season, which are four more than any other Premier League player.

Impressively, 87.5 per cent of them have come from open play.

The 28-year-old's quality really does encourage Guardiola's forwards to attack crosses. He is a dream team-mate for strikers.

Who does De Bruyne assist the most?

How does De Bruyne get his assists?

These statistics only tell a fraction of De Bruyne's influence on the team.

He has made 62 more open-play crosses than any other Man City player, while also producing twice as many key passes and assists.

De Bruyne's imagination on the ball overshadows another key attribute - an incredible work ethic off it.

As soon as possession is lost he is usually the first to trigger a press inside the opposition half of the pitch.

The midfielder has won 18 tackles this term, his club's third-highest tally, and Gabriel Jesus is the only team-mate to have won possession back more frequently inside the final third.

City's athletic data reveals that no individual has covered more ground this season.

Guardiola is notorious for demanding high intensity from his players and De Bruyne is the perfect exponent.

Most distance covered by City players

From a tactical standpoint De Bruyne provides everything he could wish for in a midfielder.

He can play in a central two or three, as a winger, or in behind the striker as a No 10. This affords Guardiola the opportunity to alter the shape of his side without upsetting the balance.

He is two-footed, creates chances, takes fabulous set-pieces, works selflessly for the team and scores a wide range of goals.

For instance, three of De Bruyne's eight strikes this season have come from outside the 18-yard area.

There are myriad gifted performers at Etihad Stadium but the brilliant Belgian is the complete package.