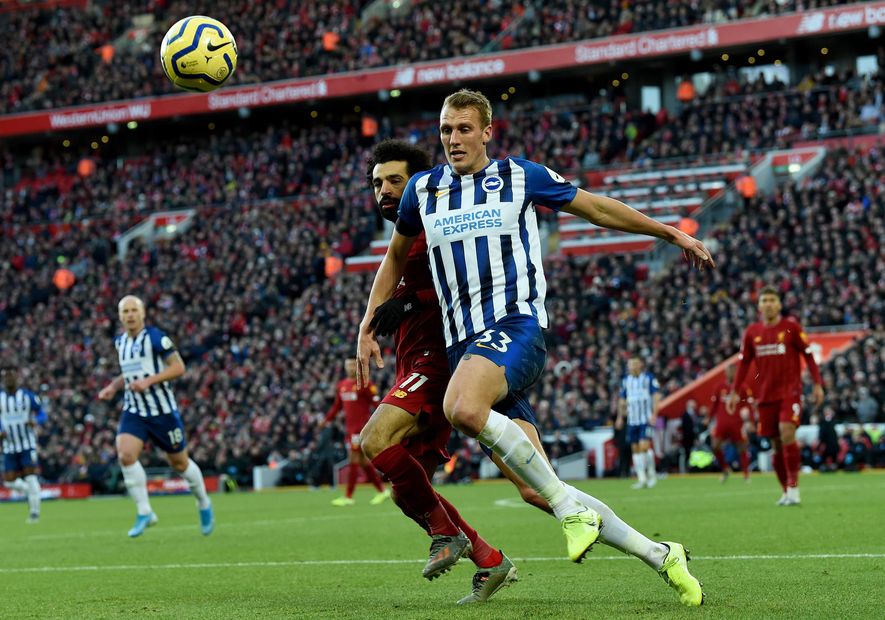 Burn: Facing men in Non-League helped me so much

Premier League launches ‘We Are One Team’ video External Link
Sidwell: Important for role models to open up

Standing at 6ft 7in tall, Dan Burn is not a difficult player to notice.

But he stands out for more than just his obvious physical attributes.

The 27-year-old has emerged as an accomplished defender in every way.

After spending the first half of last season on loan at previous club Wigan Athletic, Burn failed to make a single top-flight appearance under Chris Hughton when he returned in January 2019.

But new head coach Graham Potter quickly identified Burn as the type of player he wanted in his Brighton & Hove Albion starting XI in 2019/20.

And this season the former Fulham defender has been a model of reliability, featuring for all but 33 minutes of Premier League action he has been fit for.

From a tactical perspective Burn has become an integral figure.

For someone so tall Burn moves surprisingly easily in and out of possession.

He is willing to travel with the ball at his feet and is comfortable with his passing.

Potter identified these strengths and recognised that he had the ability to play at left-back as well as a central defender.

Burn, who transferred to Brighton from Wigan in August 2018, has made the full-back spot his own with a string of highly competent performances.

Solid defensively but also prepared to link play in advanced areas, he has really looked the part.

At home against Crystal Palace in February, Burn showed enormous confidence as an enterprising left-back.

Though they lost that match 1-0, he made seven crosses.

Across 2019/20 Martin Montoya is the only Brighton player who can boast a better crossing accuracy than Burn.

He has made 38 crosses from open play with a success rate of 23.7 per cent.

Potter regularly switches from one shape to another during the course of a match.

Unsurprisingly, he likes players who are versatile and Burn has proven to be excellent value in that regard.

In fact Burn's flexibility is the primary reason why Potter can mix up formations so frequently.

Whether shifting infield to make up a back three or pushing on in a wing-back role, Burn can seamlessly make transitions to suit match situations.

Brighton fare best when he plays at left-back in a four-man defence.

And of the four matches he has missed this season, they have lost twice.

Burn uses his height to make clearances when he tucks inside, and effectively transforms the defensive unit into a back three when dealing with danger.

His presence at full-back also grants flair players such as Leandro Trossard and Aaron Mooy more freedom to focus on their attacking duties.

These two star players often operate on the left and do not have to worry about their defensive duties so much with the experienced Burn backing them up.

The high level of Burn's displays this term should be considered one of the biggest positives of Brighton's campaign.

He provides such great balance to the Seagulls' left flank that he is now a must-pick player.

Potter's show of faith in the defender has paid off handsomely.