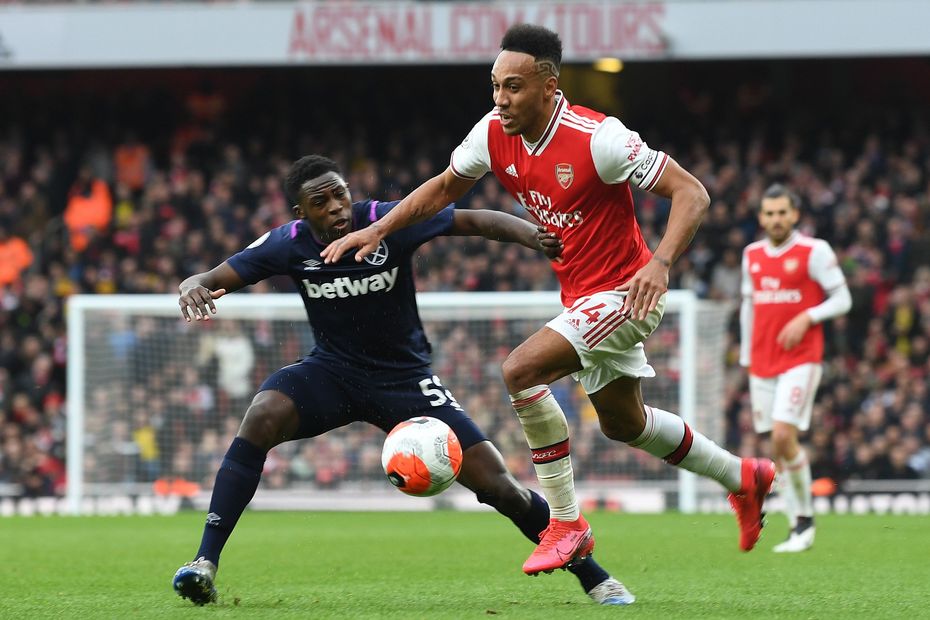 Aubameyang: 'It's a pleasure to be here, I'm really happy' External Link

Aubameyang’s value to Arsenal is clear. If his 17 Premier League goals were taken away this season, the Gunners would have 16 fewer points.

Operating as a left-sided forward, the club's top scorer in 2019/20 so far consistently delivers at key moments.

One of the key features of Arteta's regime is the fluidity of Arsenal’s movement when they build attacks down the left.

Sometimes they play in an orthodox manner, with Aubameyang hugging the touchline, supported from behind by left-back Bukayo Saka.

But, at other moments, a number of players switch positions to facilitate a different type of attack.

Granit Xhaka moves across to left-back to get on the ball, while Saka pushes up down the wing, allowing Aubameyang to move infield and become a second striker.

This creates five lanes of attack, with Mesut Ozil drifting from central areas to the right, where he likes to link up with Nicolas Pepe.

In this scenario, these five Arsenal players occupy the positions that suit them all best.

This fluid set-up works well because Aubameyang has the attributes to play as both a winger and a striker.

Arteta’s preferred shape is 4-2-3-1. Aubameyang’s adaptability means he can be selected alongside another centre-forward and attacking midfielder.

Arsenal’s captain is able to sneak into goalscoring positions with angled runs that often go undetected and so is more elusive to track from the left than as a main striker.

It can frustrate Arsenal fans to see Aubameyang performing the defensive duties of a winger inside his own half.

But he appears to relish that part of the game. And, as a player who tends to have a low touch count, it keeps him involved in the match.

Meanwhile, his ability as a winger is vastly underestimated.

In 1v1 situations, Aubameyang regularly uses his pace to take the ball outside full-backs before crossing for a team-mate.

He has delivered the most crosses from open play at the club this season, with 72. And, of the Arsenal players who have delivered at least 20, he boasts the best accuracy.

Of course, Aubameyang is also a reliable finisher. His 17 goals have arrived at a superb 36.2 per cent conversion rate.

Using your best finisher in a role that means he spends long periods outside the box seems counter-productive, but in reality it does not hinder the Gunners’ goal threat.

Arteta would no doubt prefer Aubameyang to have more than 4.65 touches per 90 minutes inside the opposition area.

But for the sake of the side as a whole, and because the Gabon international is so lethal when chances do come his way, the sacrifice is generally worth it.

Arteta recently described his skipper as his "most important player" and he was spot-on in that assessment.