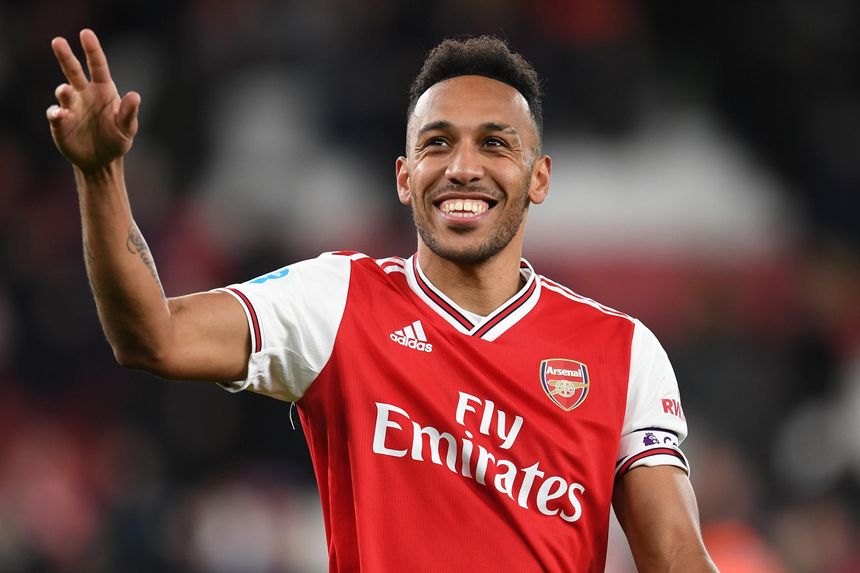 The Scout reckons Arsenal striker is standout armband pick for his two matches, with Man City midfielder battling an injury

Manchester City and Arsenal are the only two teams with two fixtures in Gameweek 29.

Pep Guardiola's side visit Manchester United on Sunday before hosting the Gunners, who are at home to West Ham United prior to their midweek contest at the Etihad Stadium.

The top-scoring player in FPL, De Bruyne is also the most-owned, sitting in 50.1 per cent of squads.

He produced his season-high haul of 19 points against the Gunners in Gameweek 17, scoring twice and supplying an assist in a 3-0 win.

But many could be reluctant to hand De Bruyne the captaincy if he remains a doubt ahead of Saturday’s 11:30 GMT deadline.

The news from Guardiola's press conference on Friday afternoon may be decisive in how managers select their captain.

He has scored six goals in seven appearances for the Gunners under Mikel Arteta, averaging 6.4 points per match.

The Gabon international produced 12 points in his previous meeting with West Ham, find the net and providing an assist in Gameweek 16.

Furthermore, Arsenal appear less likely to rotate than Man City after their recent exit from the UEFA Europa League.

There are further in-form alternatives from both sides worth considering.

Nicolas Pepe (£9.2m) is another option, having returned 22 points in Arsenal's last two matches with a goal and three assists.

But, like his team-mate De Bruyne, he claimed a double-figure haul against the Gunners earlier this season.

And with an ownership of just 15 per cent, Sterling could prove a powerful differential over the Double Gameweek.

Holly Shand (@FFCommunity_): With news of a Double Gameweek and De Bruyne currently doubtful, it's an easy decision to captain Aubameyang. Mohamed Salah (£12.8m) could punish us for overlooking his single fixture.

Paul Gee (@FplPaulGee): If De Bruyne misses out then it's probably Aubameyang. Don't forget the usual Liverpool assets, who could bounce back.

Sam Bonfield (@FPLFamily): If De Bruyne is missing this weekend that limits my captaincy options. Currently that would only leave me with Aubameyang playing a Double Gameweek and, as such, he will get the armband. There are good single Gameweek options out there too. The likes of Salah shouldn't be overlooked.

Ben Crabtree (@FC_CrabDogg): It looks like I'll be going with Aguero. It feels a risk but if he starts, he'll be motivated to earn UEFA Champions League starts.

Chuck Booth (@ChuckBoothSport): Man City and Arsenal getting a Double Gameweek is making me move my captaincy for the first time in about six weeks to De Bruyne. Realistically, my top options are him and Aubameyang but I can't blow up my entire midfield just for a few weeks of Aubameyang.

Ben McNair (@drbenmcnair): De Bruyne looks the safe option. He may not start both games but he's a viable captain with one game, let alone two. Managers looking for high-risk options have some great choices in Aguero and Aubameyang.

Geoff Dance (@GeoffreyDance): I'm tempted to captain a Liverpool player, either Salah or Sadio Mane (£12.4m), but I will likely buy Aubameyang for a four-point hit and captain him. I expect him to profit, particularly against West Ham.

Neal Thurman (@nealjthurman): It's hard not to be in on Aubameyang, with Arsenal having two fixtures this week, and West Ham being one of them.

Part 2: GW29 Captains: Salah and Mane must be considered